JUST IN
TRENDING
You are here: Home » Technology » News » Others
;

Kota Harinarayana, the man who helped build India's LCA, is building drones and other unmanned aerial vehicles that can be deployed in mission critical activities He may be 74, but age hasn’t dimmed his maverick spirit. Kota Harinarayana, the man who shaped India’s dream of building its own Light Combat Aircraft (LCA), or Tejas, is busy working on realising one more dream.

Along with a bunch of former colleagues, researchers and young engineers, Harinarayana is building drones and other unmanned aerial vehicles that can be deployed in mission critical activities. Their use will range from aerial surveillance, terrain mapping and spraying of pesticides in fields to more ambitious tasks such as transporting live organs from the rooftop of one hospital to another.

General Aeronautics (GA), the company Harinarayana co-founded a year-and-a-half ago, consists of a mostly young team with a solid leadership. Helming the project are: Anutosh Moitra, who has 35 years’ experience working for Boeing, NASA and Tata; PK Choudhary, retired Air Commodore who worked with Harinarayana on validating systems of the LCA; and Abhishek Burman who has 15 years’ experience as an aerodynamicist.

Kota Harinarayana explains the features of the quadcopter drone, a model similar to the one that took part in the CRPF trials, before a demo flight

Based out of the entrepreneurship centre at the Indian Institute of Science (IISc) in Bengaluru, where Harinarayana had studied many decades ago, GA is working on three concepts — a conventional quadcopter, hexacopter or octocopter, depending on their use and requirements. The second is a hybrid vehicle, which can take off and land vertically while flying like a regular aircraft. His ultimate goal, however, is to build an unmanned helicopter which is capable of carrying payloads of 40-50 kg.

As of now, GA has designed and developed five different drone models based on the first two concepts. The unmanned helicopter is still in the design stage, as trying to build even a prototype requires a lot of capital, which the startup doesn’t have as yet.

“We have done some design work, but these vehicles would cost around Rs 10-15 crore each to make which a startup like us can’t afford. But we are looking for someone to fund us,” says Harinarayana, who has the distinction of being the first Indian to get a PhD in aircraft design. So far, General Aeronautics has raised an undisclosed amount of seed funding from an overseas investor. It hopes to develop a revenue stream soon by selling its drones as well as offering them to customers and partners it has identified.testing.. we are here....

The helicopter will be mostly indigenous as the company plans to use either an electric engine or the wankel engines that have been jointly developed by National Aerospace Laboratories and Defence Research and Development Organisation, and which are usually used for bigger unmanned aerial vehicles. “The whole idea is to make it as indigenous as possible. That way the costs will be low,” says Harinarayana.

When he was programme director for the LCA, Harinarayana was a big proponent of using indigenous components. In the course of building India’s first fighter jet, he worked closely with 40 laboratories, 25 academic institutions and almost 300 companies. As a result, outside of the engine, almost 80 components of the aircraft were designed and developed locally.

This is one reason Harinarayana and his team decided to work out of the IISc, which they say will help them collaborate with researchers at the institute who are already working on affiliate technologies.

GA is targeting three different sectors with its drones — defence, agriculture and medicine. Five drone models have already been developed: two quadcopters — one tethered and one untethered; one agricultural drone that has the capacity to carry 15 litres of liquid and can be used for precision spraying of pesticides; and two winged drones that can take off and land vertically.

They can be used for medical emergencies where drones can carry emergency medical supplies to an accident site in a remote location or even in gridlocked city streets. 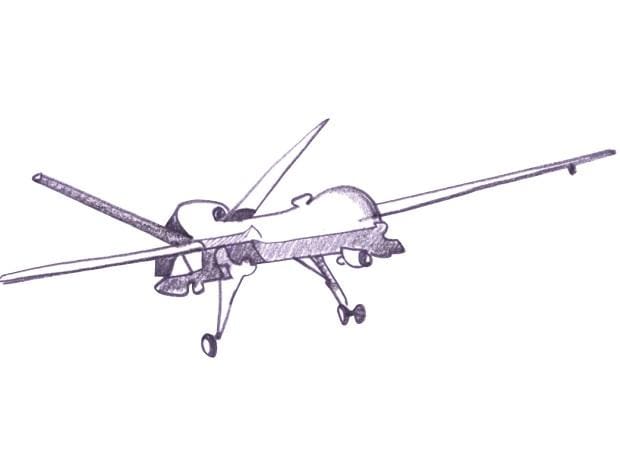 The requirements are different in the defence sector. The drones suitable in this field are those that can be assembled and deployed quickly, are relatively noise free, and come equipped with infrared and regular cameras. They should also be able to transmit video and data in real time. Moreover, the devices should be small, light and be able to navigate autonomously.

Some weeks ago, GA simulated a real-life reconnaissance mission with its drones when it participated in a technical evaluation done by the Central Reserve Police Force (CRPF) in the jungles of Naxal-infested Chhattisgarh. The quadcopter, which is equipped with day and night vision cameras, took part in multiple exercises that tested its ability to fly in the dark, its autonomous flying capabilities and so on. GA, along with two other drone manufacturing companies that participated in the tests, await further feedback from the CRPF.

“It was a great experience for our young team. How does our vehicle work in a real jungle? How does our software work? How do our communications work,” says Harinarayana. “I think the CRPF is using some drones, but they require many more. Rather than import them, the government is pushing them to use indigenous drones.”

A big challenge to developing drones in India is the lack of policy. GA jumped at the opportunity of participating in the CRPF trials not just in the hope of winning an order, but also to validate and test its systems in a real-world simulation. The lack of a drone policy in India forces companies like GA to conduct small trials on private land which is unsuitable for the complete validation of drone systems.

Harinarayana knows only too well that getting policies drafted is an arduous task. Even so, he is confident that the Directorate General of Civil Aviation (DGCA) will come out with a policy in this regard soon. The DGCA’s app-based permission system to fly drones will be unlike any other in the world, asserts Harinarayana, adding that the government realises that it cannot be left behind in building its own drone technologies.

The optimist that he is, Harinarayana believes that the future of drones in India will ride on small and medium enterprises, R&D labs and academia. But someone has to hand-hold them all, someone with the capability to design and integrate all the various systems that are required to make a fully functional aircraft.

As things stand, that someone is clearly none other than Harinarayana.