Football's showpiece event, the World Cup, kicks off on June 14 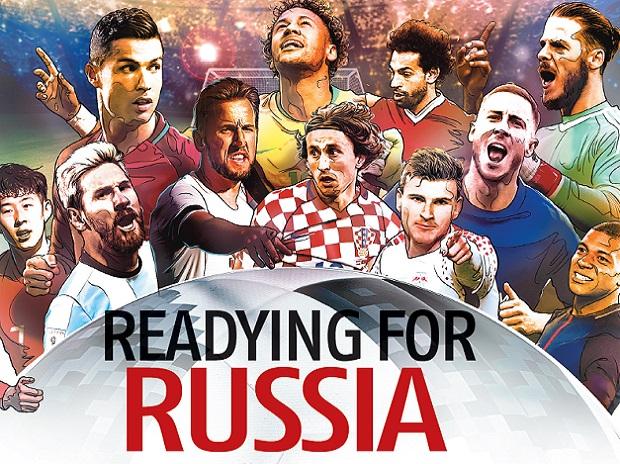 And there it was. On an exhilarating, slightly anticlimactic night, Sergio Ramos enacted before us the most disquieting scene of any pre-World Cup script. We surely wouldn’t be in a World Cup year if some calamitous turn of misfortune had somehow failed to put a marquee player’s participation in jeopardy. Neymar’s foot injury was too early in the piece to have us genuinely worked up — the Brazilian was always expected to be ready just in time for Russia. Match sharpness was a concern but such fears were extirpated after his wondrous strike against Croatia last week.

So up stepped Ramos, the entrancingly good-looking villain of our overly benevolent footballing times, the doyen of big-match barbarity. In a kind of move that sublimely skilled Japanese judokas put to good effect to amass Olympic gold medals, the Real Madrid captain rolled and then twisted the right shoulder of Liverpool’s Mohamed Salah in the Champions League final on May 26. Even two weeks and hundreds of replays later, it is impossible to tell if this was pure accident, or a premeditated, masterful act in cynicism. Either way, the winger is now unlikely to start Egypt’s opening Group A game against Uruguay on June 15.

Egypt without Salah is like an army going to war without its most decorated general. And on Wednesday night, the bruised pharaoh witnessed his infantry getting vanquished, by a breathtakingly talented Belgian side that will invite fear wherever it goes. But mind you, Salah will definitely feature somewhere along the line. After the season he has had, Salah will be too keen — and his team too unexciting without its talisman — for him to be left out for long, even if he is only 50 per cent. There is, invariably, a danger involved with that. Flashback to 2006 and Wayne Rooney, and you will realise that such rushed comebacks mostly end in tears and national heartbreaks.

Group A is actually quite an interesting place to start. None of the so-called big teams feature here, with Russia and Saudi Arabia making up the rest of the group.testing.. we are here....

The hosts’ economy is in the doldrums and municipal officials have been out parading the streets armed with tranquilliser darts — Russia is home to almost two million stray dogs. Unfortunately, their football has been no saviour. They may have won the right to host the tournament on the back of suspected political chicanery, but their football remains as stolid as Vladimir Putin’s visage. Aleksandr Golovin, Denis Cheryshev and Alan Dzagoev are all decent players, but this is Russia’s weakest squad in some years. Which essentially means that Uruguay, with their unique blend of Latin verve and Luis Suarez nastiness, will be the side to beat. Despite the somewhat middling nature of star attractions, this seems the kind of group that can throw up the most thrilling football, disobeying the norms of cageyness that often smother football at this high-stakes level.

Suarez’s Barcelona teammate, Lionel Messi, and his Argentine side cancelled a friendly against Israel in the face of intense political pressure earlier this week. The Palestinians are ecstatic, the fans in Jerusalem distraught. In striker Gonzalo Higuain’s words, “They (Argentina) had finally done the right thing.”

The opening match in Russia, on June 14, will mark 47 months of Higuain’s 2014 World Cup final miss against Germany that sent Argentina into meltdown. A calmer, sturdier Higuain that Maracanã evening would have spared us the cacophony that routinely accompanies the “who’s the greatest?” discourse. Make no mistake: Messi has done nothing in the past four years to suggest that his credentials for the crown have diminished in any way. But the dogmatic football clergy demands a World Cup winner’s medal as validation for global dominance. And for Messi, this looks like his last chance.

Most of the “truly great” players of the last 50 years — Pelé, Franz Beckenbauer, Diego Maradona, Zinedine Zidane, Ronaldo (the Brazilian version) — have won the World Cup. In the eventuality of Argentina or Portugal failing to win the title in Russia, we will be left dealing with the awful predicament of this generation’s finest two players, Messi and Cristiano Ronaldo, ending their careers without a victory at the sport’s grandest stage.

Perhaps Argentina’s diminutive No 10 will feel significantly better knowing that his chances of lifting the trophy are slightly superior to Ronaldo’s. Unlike Messi, Ronaldo’s impact for his country is limited — as a number 9, he often cuts an isolated figure as his less illustrious teammates toil and try to create openings for him to score. Drawn alongside Spain, Morocco and Iran, Portugal will most likely progress. But despite a dogged defence, toppling Spain for pole position in the group will take some doing.

The Spaniards still love a possession-based game, but under Julen Lopetegui, they have shown they can go direct as well. To state a sporting cliché, La Roja come loaded with a quite brilliant fusion of youth and experience. In the trio of Isco, Thiago and Koke, they have three players who have the look of world-beaters, and Andrés Iniesta and David Silva are two calming constants capable of unlocking a game whenever they want. Add to that Ramos, Sergio Busquets, Gerard Piqué and David de Gea, and you get a pretty decent defensive line. Betting on Spain going all the way won’t be the most unintelligent thing. With so many seasoned winners in there, a repeat of 2010 is indeed possible.

As for Argentina, this is a poor side that constantly demands the magnetic touch of the preternatural phenomenon that is Messi. Most of its attacking players — Paulo Dybala, Giovani Lo Celso, Ángel Di Maria — share overlapping interests on the pitch, meaning that coach Jorge Sampaoli is bound to endure a difficult time picking which formation to play; more importantly, choosing the one that would be able to utilise the talents of their captain the best. In the end, it may just be a standard 4-4-2, with Sampaoli choosing defensive soundness over cluttered offence.

Danny Rose, Tottenham’s English left-back, recently opened up about suffering from depression, triggered by injury and family tragedy. It is form in warm-up games — and not candid admissions — that generally reflects the mood in any team’s camp ahead of a major tournament. England’s form has been all right — Marcus Rashford scored an absolute worldie against Costa Rica in a 2-0 win on Thursday. But more than what’s happening on the pitch, it’s the revelations by Rose — unthinkable for a Three Lions player of yesteryear — that are truly indicative of how this young England team is progressing. Manager Gareth Southgate has infused a quiet confidence within the squad, spawning a player-coach trust unseen in English teams of the past. Irrespective of how far they go (don’t get your hopes up), there is something strangely likeable about Harry Kane & Co.

In Group G, they will be confronted by Belgium, Panama and Tunisia. Going by their last two showings in big competitions, we will be content as long as this team exhibits a raw fearlessness and spares us the insipidity that has ravaged campaigns of years gone by.

If it is any consolation, England’s drabness in Brazil four years ago was less humiliating than the hosts’ implosion against Germany in the semi-final. Minus Neymar and Thiago Silva, the Seleção were walloped 7-1 by an imperious German side that will be among the contenders yet again. This Brazilian team is markedly better, though. The workload on Neymar is still immense, but they have managed to develop two excellent number 9s in Gabriel Jesus and Roberto Firmino. The central midfield is overflowing with quality, with coach Tite having the options of Casemiro, Renato Augusto, Fernandinho, Paulinho and new Manchester United signing Fred at his disposal. They have the speed of Willian and Douglas Costa to go with that. Willian, in fact, is one of the more underrated players around. With a stunning turn of pace and terrific technical ability, the Chelsea man can be unplayable on his day. Irrespective of how deep Brazil go, there is a certainty that they bring: they will entertain. Will the others?

For those of us smitten by the allure of the European club game, international football can often be a tedious watch — a deterrent the tournament in Russia must overcome. With little preparation time for teams, there is seldom any philosophy, distinct style of play or tactical nous on show. Mostly, coaches fail to make players who are superstars for their respective clubs gel, leading to a disjointedness that only repels the audience. That probably explains why German coach Joachim Löw considered Manchester City’s Leroy Sane to be surplus to requirements.

And unlike the Brazilian team of the early 1970s, or the French side of the late 1990s and the early new millennium, or the Spanish juggernaut of a few years ago, world football is currently devoid of a great team. Moreover, the international game no longer attracts the best managers, the most charismatic personalities. All the captivating coaching specimens — Pep Guardiola, Jose Mourinho, Jürgen Klopp, Antonio Conte, Maurizio Sarri, Thomas Tuchel — are contracted by top European clubs.

These are the challenges that World Cups in recent years have faced. In an entertainment sense, Brazil 2014 came out with flying colours, averaging 2.7 goals per game. South Africa in 2010 wasn’t so lucky: the average return of 2.23 goals per game was the lowest since Italy 1990 (2.21). The matches were thoroughly unwatchable, and Spain, the eventual champions, won most of their games by the solitary goal.

Going by the recent past, Russia 2018 will do well to dazzle us. But then you think of the Neymars and the Messis and the Kanes and the Iscos, and you realise that it may not be so bad this time, after all. We will find out in five days’ time.