JUST IN
TRENDING
You are here: Home » Specials » TakeTwo » Stories
;

How Renault put itself back in the game

The French car maker has gained a firm footing in the small car segment, and is well on its way to becoming the topmost European car brand in the country 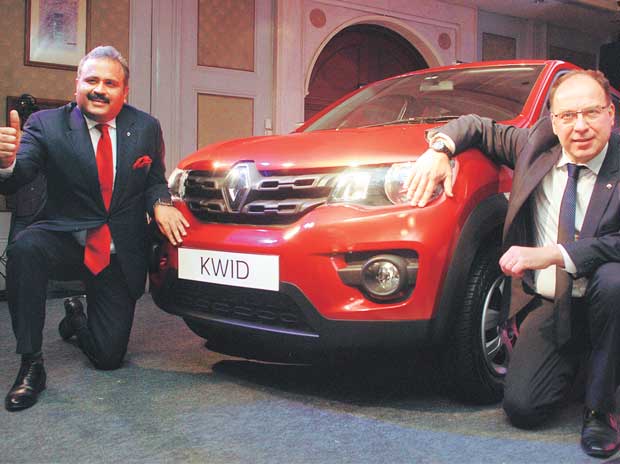 Barely a couple of months after he was elevated to the position of Renault's chief executive and managing director of India operations in early 2014, Sumit Sawhney shared a mid-term plan with the various stakeholders. He claimed that Renault will be the topmost European brand in India with a 5 per cent market share by the end of 2017.

The French car maker had just about 2 per cent share in the Indian passenger vehicle market in 2013 and most did not buy Sawhney's claims.

In June 2016, Renault's share in the Indian passenger vehicle (cars, utility vehicles and vans) market stood at 5.3 per cent and the April-June quarter share is 4.7 per cent. By all accounts, Renault appears well placed to exit 2016 with a 5 per cent share that Sawhney had projected to gain by 2017.

Back in 2014, Sawhney was probably able to see what others could not. Having tasted success with the Duster SUV that was launched in mid-2012, he could well anticipate the response that its small car with its SUV-ish look would generate. "We had sold 150,000 units of the Duster by the time the Kwid was being launched. We had already developed trust," says Sawhney.

The small car, known as Kwid, was launched in September 2015 and has almost single-handedly changed the fortunes of Renault in India. It has brought excitement and disruption to a segment where every other manufacturer remained conservative. No other segment would have been able to give Renault the volumes.

What clicked for the Kwid? Renault's Indian operations decided not to graft a design or components from abroad when it conceived the Kwid in 2012. Therefore, a strong supplier base was developed locally and given the flexibility to innovate and deliver components at competitive prices.

This allowed Renault to launch the car at Rs 2.56 lakh in September 2015, and to promise lower maintenance and higher mileage than competing brands. The Kwid is now priced at Rs 2.62 (ex-showroom, Delhi) against Alto 800's Rs 2.45 lakh and Hyundai Eon's Rs 3.26 lakh.

The result was an aggressively priced car with unmatched localisation of about 98 per cent at launch, bookings of 100,000 cars within six months, and a foothold in the highly complex entry segment of the Indian car market. A large part of the credit for the Kwid's success goes to sourcing of local components.

"We were very clear that if we are not at 90 per cent plus localisation, we cannot get this pricing for the car. People got a shock when we announced the price. Nobody in the industry ever thought we can launch this car at this price," says Sawhney.

Renault took the right cues from various market studies on the kind of cars buyers in the entry segment wanted and decided to bring a car with the looks of an SUV. The Kwid promises lower maintenance and claims to offer higher mileage than competing brands. No wonder, then, close to 50 per cent of Kwid buyers are first time car owners who have graduated from two wheelers.

That the market lapped up the Kwid can be seen in the huge bookings. The car has seen bookings of about 125,000 units and Renault has managed to deliver about 70,000 so far. The car commands a waiting period of two to three months. In contrast, the other cars in the segment, Maruti's Alto and Hyundai's Eon, have not shown any growth for several months now.

Renault had to ramp up the capacity for the Kwid to 10,000 units a month from 6,000 units earlier this year by introducing a third shift at its Chennai plant.

The Kwid has emerged as a prominent competition to the most sold small car, Alto, manufactured by the country's largest player Maruti Suzuki. The Kwid already figures in the list of top ten most selling cars in the country. It has helped Renault overtake Japanese auto major Honda in volumes this year. India now ranks among the top ten markets for Renault.

However, Maruti is not unduly worried. In fact, it is confident the Alto will continue to retain its leadership position in the market, given its unmatched after-sales service network and affordable spare parts.

Sawhney, who worked with GM before moving to Renault, is cautiously optimistic. "We need to make sure that this growth is sustained and customers are satisfied". After the initial euphoria, the Kwid has to undergo the real test of meeting spares and service requirements of thousands of customers.

The popularity of the Kiwd has prompted Renault to revisit its network expansion plans for 2016. Earlier, it had planned to open 30 outlets in 2016, but it will now set up 60 outlets to take its total network strength to 270.

Although manufactured with a focus on the Indian market, the company exports the Kwid to neighbouring Sri Lanka and plans to ship it to Nepal, Bhutan, Bangladesh, Brazil and South Africa in the future. "We wish to be among the top three players in Sri Lanka's small car market," says Sawhney. That space is currently dominated by Maruti Suzuki and Micro, a local player.

To cater to buyers who are looking for a more powerful engine and performance, plans are afoot to upgrade the Kwid's engine from 800cc to 1000 cc.

In the future, Renault will look at opportunities in the sub-four-metre car space. "Seventy per cent of cars sold in the country are in this segment and priced below Rs 7 lakh. We have an opportunity in that space. With the Kwid, only one-fourth of that segment is being catered," says Sawhney.