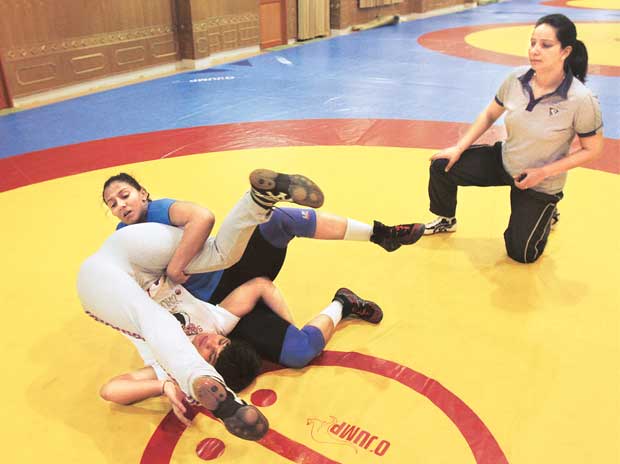 As a large contingent leaves from Rohtak for New Delhi to receive Olympian Sakshi Malik, Ritu Malik and Rina Saran stay focused as they wrap up the day's routine. An international championship is just around the corner - in October - and Sakshi's bronze at Rio has only boosted their spirits.

For six hours every day - three in the morning and three in the evening - female wrestlers at Chhotu Ram Stadium Wrestling Academy train rigorously on the mat. A sport traditionally considered a male bastion is seeing an increasing number of women participants. And, in a striking display of gender equality, men and women train together - sharing the same space, exercise regime and diet plans.

"This is perhaps the only space where we are not treated differently," says Ritu. The 23-year-old, a student of BSc in sports science, wears her hair in a short crop, an almost salient feature of female wrestlers, especially those who pursue the sport with any degree of seriousness.

The day for the women begins with a demanding workout regime, which includes running for at least five kilometres. This is followed by a training session on the rope, where the athletes scale ropes to strengthen their arm, leg and core muscles. This also helps them improve their breathing techniques to hold their own against their opponent on the mat.

Then begins the sparring. The coach, according to the wrestlers, treats the men and women alike. The women even bout with young male wrestlers, and the competition athletes find opponents in bulky men such as Bhim Malik. "When Sakshi joined the academy, she was just a little girl. She used to wrestle with the boys here. That's how all of us learn," he says.

For beginners such as 13-year-old Vidhi Panja, "seniors" like Ritu and Saran act as coaches. The bashful ninth-grader looks visibly in awe of the more experienced women and takes their lead even in answering questions about her diet. The one staple that all wrestlers, male or female, swear by is almond. "There is no supplement that can provide the energy and nutrients that almonds can." While Panja has made a modest start with about five almonds a day, seasoned wrestlers consume up to 120 almonds a day. Just on diet and physiotherapy visits, trained athletes spend up to Rs 40,000 a month out of their own pockets. 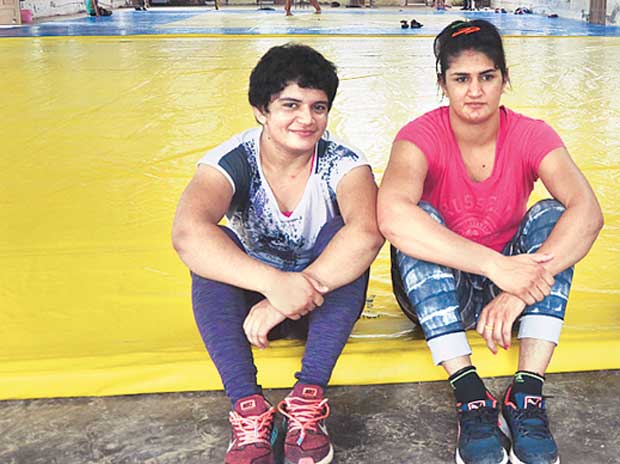 Ritu Malik (left) and Rina Saran at Chhotu Ram Stadium Wrestling Academy in Rohtak
As with any exercise ritual, a session on the mat is followed by a scoop of protein supplement, preferably with about half a litre of milk. While no one openly claims to eat meat, most wrestlers swear by eggs. "Unless your family is particularly strict about not eating non-vegetarian food, it is the best way to build muscle and yet not gain unnecessary weight." The formula of how much one must eat and in what proportion is simple for Bhim. "You eat according to your weight." Saran says that while athletes from other countries travel with nutritionists and physiotherapists, they are mostly left to their own devices. "Our coach tells us what to eat and which brand of protein supplement to buy. The rest we watch and learn when we travel abroad for championships."

At Chandgi Ram Akhara, one of Delhi's oldest akharas, Vidhu Yadav sounds like an ayurveda doctor herself. "If you blend almonds, khas and mishri with milk, it will give you unmatched power. Our elders used to eat roasted chana as snack. I follow the same principles," says the 21-year-old. In a dank hall, she warms up in one corner as young men begin to spar. Unlike the egalitarian nature of a wrestling academy, women here face subtle resistance from men. "Even though we have the same training routine, the men feel their egos are bruised if they spar with me," says Samiksha Malik, a student of BA Programme at Lady Shri Ram College.

Dressed in long leggings and a blue jersey, she stands out among the male wrestlers clad in their wrestling attire. After participating at international sporting events and being trained in the sport for over seven years, Samiksha says she still needs to wait her turn on the mat. "There are times when I want to practice and I am turned away because I'm told I'm distracting the men. They say we are equals, but even the most successful academies have different timings for men and women."

While in Rohtak, female wrestlers would not even pose for photographs without their proper wrestling gear and shoes, women in akharas wear even shorts that fall below their knees.

Though the women are open and confident about sparring with men, the men tend to get nervous when asked about training with women. Satyanarayan Khanna pehalwan merely shrugs when asked about how gender plays out during practice sessions. "God made our bodies alike. Men most certainly need to be more careful when practising with women, but they need to see the women as wrestlers rather than members of the opposite sex." Just as male wrestlers are advised celibacy, Khanna believes that women also must follow this tradition to stay focused. "How else will they retain their power?"

Twenty-year-old Dipika Nagar has the answer to that. "You need to eat fewer rotis but with ghee. A glass of mausambi juice after training is must. And about half a litre of milk before sleeping will make sure you're strong enough for the next day."

So, when does a wrestler know that she's ready to compete? "Not even the finest coach will tell you that he is an expert. Wrestling is like a computer, there's always something new to learn," says Saran. The computers, though, need the right support system - coaches, nutritionists and doctors - to make sure there's more than just guesswork to their success.