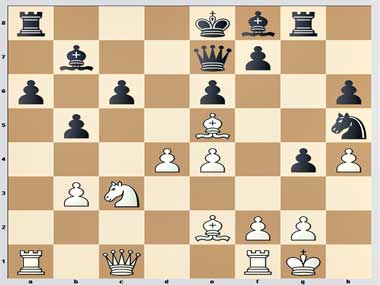 Jeffery Xiong clinched the World Junior (Under-20) with a round to spare at Bhubaneswar. The second-seeded 15-year-old American GM scored 10.5 points from 13 games. He was followed by top seed Artemiev Vladislav (9.5), with Sunilduth Lyna Narayanan and Xu Yi sharing 3rd-4th (9 each). Other Indian hopefuls, Murali Karthikeyan (8.5), Aravindh Chithamvbaram (8) and Praggnanandhaa (7.5) did well but suffered losses at critical moments.

In the Girls event, top seeded Dinara Saduakassova (9.5) of Kazakhstan won. She was chased by P V Nandhidhaa (9) and Dinara Dordzhieva of Russia. R Vaishali was in the next set, scoring 8.5 to share 4th-8th place. Michelle Catherina and N Mahalakshmi (both 8) were in the tie for 9th-12th.

Grischuk is the reigning world blitz champion. In their last blitz match, in June 2016, Grischuk won 2.5-1.5. However, this time, Carlsen steamrollered Grischuk 16-8. It was more or less even with Carlsen up 8.5-7.5 until the bullet section where Carlsen pulverised Grischuk 7.5-0.5. Carlsen takes on Nakamura, who beat Vachier-Lagrave even more convincingly at 21.5-10.5 (played very quickly allowing for more games).

Carlsen will be more focussed on his upcoming title match against Sergey Karjakin. He has pulled out of the Grand Chess Tour to prepare the title defence. However, the world no 1 did play Brussels and Paris, both times as a wild card. He won Brussels-Leuven and finished second in Paris behind Nakamura.

Wesley So leads the GCT after winning the Sinquefield and finishing second in Brussels. The London Classic (the last GCT event of 2016) has just awarded Michael Adams the organisers' wild card, so Carlsen won't be there.

The Diagram, WHITE TO PLAY (White: Nakamura vs Black: Ding Liren, Sinquefield, St Louis 2016) is the start of a spectacular attack. It may have been largely preparation but it's superb nonetheless.