A wondrous tale of India 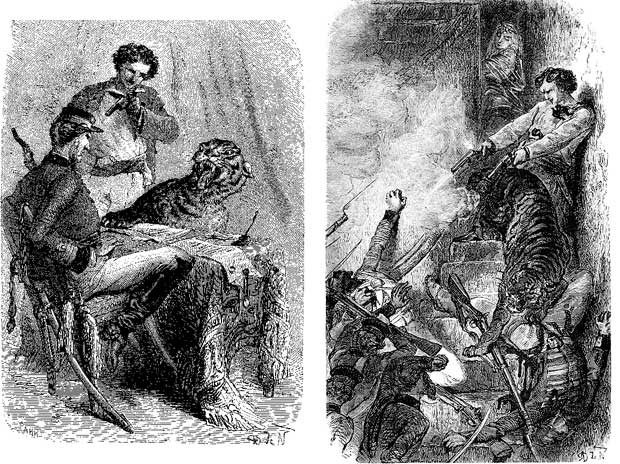 Rarely does one come across a book the story of which is as fascinating as the book itself. Once Upon a Time in India: The Marvellous Adventures of Captain Corcoran is one such novel.

The rollercoaster adventure, featuring a daring and dashing young Frenchman named Captain Corcoran and his best friend, an extremely intelligent and loyal, if somewhat capricious, tigress called Louison, is set in central India in the backdrop of the Sepoy Mutiny of 1857. Published for the first time 10 years after the actual events unfolded, it became an instant hit and was soon translated into six languages, including Czech, Polish and Russian, but the English wouldn't touch it with a bargepole.

Written by Alfred Assollant, an all but forgotten French author, whose contempt for the English and their pompous ways leaps out of the pages with such humour and understated sarcasm that it's not surprising the British, facing the kind of revolt they were in India, wouldn't want the book read. The Anglo-French rivalry is at its witty best here.

Now, 149 years after it was first published, Assollant's masterpiece has finally been translated into English by former BBC journalist and author Sam Miller, whose wife's 90-something stepfather first introduced him to Corcoran and his India, the land of Brahma and Vishnu, of maharajas, fakirs, princesses, elephants and rhino hunts - in short, the land of intrigue.

If Assollant thinks nothing of the English, he is not particularly kind towards the French either, who he mocks no end in the very opening chapter of the book during Corcoran's first encounter with the self-important scholars of the Academy of Sciences in Lyon. Corcoran is here to offer his services to the Academy to search for the Guru Karamta, "the most important sacred book of the Hindus.

It is this quest that brings him to India, to Maratha king Holkar (in 1857, the Holkar dynasty, in fact, ruled large tracts of central India) and lands him in the thick of the conflict between the king and the British. Central to the plot is also the king's beautiful daughter, Sita.

Corcoran's logic is simple: the enemy of the enemy is a friend. So, though his brief is to remain apolitical and find the sacred book for France before the English do, he digresses and jumps right into the middle of the strife - as much for the sake of the beautiful Sita, who has been kidnapped by a traitor in the palace and who wants her for his wife, as for the pleasure of rubbing the snooty English nose in the ground.

For someone who never set foot in India, Assollant knew its history and geography. Well, almost. He does get some names wrong and messes up some references and is also a bit careless with the description. For example, at one point the name of the sacred manuscript becomes Ramabagavattana instead of Guru Karamta. And he describes the traitor, a senior official of Holkar, as the son of a Parsi merchant and calls him Rao - an unlikely name for a Parsi. And, an English lieutenant named John Robarts, who has only a few pages earlier been arrested on the orders of a British colonel, suddenly reappears and leads the hunt for a fugitive Corcoran and Sita.

However, these are minor glitches in a fascinating tale that keeps one hooked till the end. Yes, the Indians have been projected as faint-hearted compared to the Frenchman. And other stereotypes also pop up, like the twisted decisions Indian kings are sometimes wont to make - such as Holkar choosing to take Corcoran for a rhino hunt even though he is well aware that the British are marching to his palace and that his daughter's safety is under threat (and where in the Deccan would you find a rhino, anyway?).

The tone of the prose also reflects some of the standard Orientalist biases. For example, in one place, Assollant writes: "He (Corcoran) had so little confidence in the courage of the unhappy Indians, he didn't feel sure of being rescued." Or, when Corcoran asks Holkar what had become of the traitor who had been captured just hours ago, the king nonchalantly replies: "He has already been judged. Before dinner, I gave the order for him to be impaled." Seeing Corcoran's astonishment, he says: "My friend, my maxim is arrest immediately and impale immediately." That subtext, you would think, is that Assollant was convinced that Indian kings didn't quite believe that punishment had to be pronounced only after a fair trial.

But there are also endearing, if comical, moments when the vulnerability of the French hero comes to the fore. Such as, when trapped in a temple and surrounded by the English, in a moment of temporary truce, Corcoran requests Robarts, the British lieutenant, to lend him his wash-bag so that he may tidy himself up before the beautiful princess, also trapped with him in the temple, wakes up.

Assolant didn't care much for monarchy and that is evident when, at the end of the story as order has been restored, he challenges the caste system and speaks of reform, democracy and equality, when all men above 20 can stand for election. In a sense, he was the product of 1789.

In his memoir, Jean-Paul Sartre wrote that this was the one book that helped him escape from the awfulness of his childhood - one that would make him forget himself even when he would read it in his middle age. Locked up in a prison for most of his adult life, Italian neo-Marxist theorist Antonio Gramsci too found solace in the "wondrous stories of Corcoran" and his rebellious tigress, Louison.

Assollant died in a paupers' hospital in Paris at the age of 59. Like him, for years his Corcoran and Louison remained forgotten. It's a good thing that Miller rediscovered them and has now opened their world to us.