Rohan Bopanna, who has earned a direct entry into the men's doubles event has the privilege to pick the partner of his choice 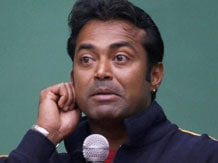 Leander Paes will have to forego his claim on the mixed doubles event to be able to play in his seventh Olympics as efforts are being made to convince Rohan Bopanna to accept him as a men's doubles partner for the Rio Games.

It is Bopanna, who has earned a direct entry into the men's doubles event by virtue of his top-10 ATP ranking that also gives him the privilege to pick the partner of his choice.testing.. we are here....

The 42-year-old Paes' dream of appearing in a record seventh Olympics may remain a dream if Bopanna decides to play with a player, ranked lower than Paes (world No 46), since it would mean the veteran cannot go to Rio.

For the lack of enough higher-ranked players, India can field only one team in men's doubles.

The piece of history that Paes is eyeing is clearly in the hands of Bopanna and the winner of 18 Grand Slam titles will have to let go of his wish to play with Sania Mirza in mixed doubles, a format in which Paes has excelled in the last 18 months, completing a 'Career Grand Slam' with his latest triumph at the Roland Garros.

A tense AITA is trying to ensure that no bad blood is created this time before the Olympics and everyone gets to play.

Bopanna has not revealed his choice as yet but it has been learnt that AITA is likely to ask him to pair with Paes, keeping in mind the popular sentiment as well his ability.

"It makes sense if number one and two players of the country play as a team. Even a layman would also think that way. Rohan, no doubt, has the choice but here it is question of nation and not an individual. We are hoping that common sense will prevail," an AITA official told PTI.

"And Leander is no less than Rohan. Yes, his ranking has gone down but he did not have a steady partner for some time. He played well at the French Open also. We do not intend to interfere but we will act in way which is in the best interest of the nation," the official added.

Bopanna has the option to choose India's fifth-best Saketh Myneni (125) since other higher-ranked players such as Purav Raja (103) and Divij Sharan (114) do not meet the Davis Cup criteria to be eligible for Olympic nomination along with Jeevan Nedunchezhiyan (134) and Mahesh Bhupathi (164).