JUST IN
TRENDING
You are here: Home » Politics » News » National
;

Common man at the heart of my govt's reforms: PM

I tightened the screws on bad loans, told banks no phone calls will go to them from Delhi: Modi 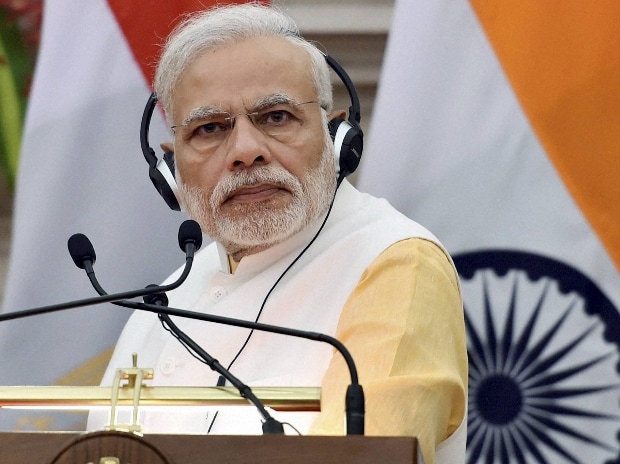 Prime Minister Narendra Modi has said that the Goods and Services Tax (GST) regime, once rolled out, will reduce the tax burden on the common man. Terming it the biggest taxation and financial reform since India’s independence, Modi said greater transparency in taxation and simplification of rules would increase compliance and revenue.

On Thursday, the GST Constitutional amendment Bill crossed a key landmark with Odisha’s becoming the 16th state assembly to ratify the Bill. This met the requirement of more than half of 31 state assemblies approving the Bill for it to now go for presidential assent. Modi, in an interview to Network18, said the GST will usher in a sea change in a country like India where very few people pay taxes.testing.. we are here....

He said the simplification of tax rules after GST will embolden the common man to come forward to pay taxes. He highlighted that at the centre of the reforms brought about by his government was the common man. “Actually, reform to transform…How to make life easier for the common man, how they will get what is their right, we want to stress on these,” Modi said.

On GST, he said: “Today, there are several cess levied if you eat at a restaurant. People post on WhatsApp that this is the bill for food and this is the amount charged by sundry cess. All of this will end. This will have a positive impact on the pocket of the common man,” he said. Modi said GST will help bridge the trust deficit between the Centre and states and also strengthen the taxation system.

The PM he spoke on a wide range of issues from Lutyens’ culture, atrocities on dalits, Kashmir situation and the forthcoming elections in Uttar Pradesh. The PM said he suffered political damage for his decision to not issue a white paper on the state of the economy when his government took over in May 2014. He said the sluggish private investments was a continuing fallout of the economic conditions that prevailed when he took office two and a half years back but his government has resisted the temptation to take shortcuts, positive results of which were now evident across several sectors.

The PM suggested the laggardly private investments could be due to his “tightening of screws” on Bank NPAs (non performing assets). Incidentally, the interview was telecast on the last day in office of Reserve Bank of India Governor Raghuram Rajan. The issue of NPAs, or bad loans, was a contentious one between the government and Rajan. Modi said he had held a meeting with bankers and told them that there would be no phone calls to them from New Delhi (on issuing loans to industrialists).

“Despite that, the pace at which roads are being made, railways is expanding. There’s a six-fold increase in electronic goods manufacturing…These things show we haven't taken shortcuts. And my motto is like what you see on railway platforms — 'shortcuts will cut you short'. We don't want to take any short cuts and the results are showing,” he said.

Modi said the economic situation in May 2014 was much worse that it seemed on the surface. Modi said he was confronted with a choice – whether to be politically expedient and put the poor state of the economy in the public domain or keep the interest of the nation uppermost. He said his government had even mulled tabling a white paper on the economic condition in Parliament before the presentation of the first budget.

“But that would have dragged the economy even lower, markets would have been badly hit, increased hopelessness, affected the market and the world’s view of India would have become worse. It would have got very difficult to pull out the economy out of such morass,” he said. Modi said this was a reason why his government didn’t make public the jugglery that was done in previous budgets (during the UPA rule) and the condition of non-performing assets (NPAs).

The PM said opted to be silent in national interest even at the cost of political damage. “It hurt us, we were criticized. It was made to look like it was my fault. All these issues from the past impacted private investment,” Modi said. The PM said the positive fallout of this has been that he is now being able to address these issues.

Modi said that in the years to come it will be a matter of surprise when unbiased people sit down to analyze the choices his government has made on the economic front.

“In our country, whatever is talked about is seen to be a reform, if it isn’t talked about it isn’t seen as reform,” the PM said. He bemoaned the general tendency to ignore reforms that actually make the difference. The PM listed his government’s key reforms to have been direct benefits transfer (DBT), repealing of nearly 1700 obsolete laws, freeing of 10 government and 10 private universities of UGC rules and easing rules of doing business. “We will give them money and they must move towards becoming world class universities. If rules are holding them up, we will remove the rules, now do it and show us. This is a major reform but doesn’t get people’s attention.”

On atrocities against dalits

The PM said such incidents had no place in a civilized society. “There has been a conspiracy to selectively raise these issues to defame Modi,” he said. Modi said BJP currently has more dalit and tribal Members of Parliament and state legislators compared to any other party. He said his espousal of the dalit cause and celebrating the contribution of Dr BR Ambedkar had made those people nervous who believe the dalit vote is their fiefdom. "Those who consider themselves as "thekedar" (self- appointed champions) of some special section and want to create tension in the society, they could not digest this that Modi is pro-dalit..." PM said he was committed to the welfare of dalits, tribals, women and other deprived sections.

"I want to tell politicians, including the leaders of my own party, that there should be no irresponsible statements against any person or community. The country's unity, social unity and equality should not be affected. We should be extra cautious," Modi said, adding that the media was interested in its TRPs (television rating points) but politicians needed to more responsible.

He said the number of atrocities on dalits and incidents of communal violence have come down during the two and a half years of his government when compared to the UPA rule.

"I have been Chief Minister of a state (Gujarat) for 14 years. The history is witness to it that I have never opened any file because of political reasons. There has been no such allegation against me. It has been over two-and-a-half years here (in government at the centre). There is no instruction from the government to open any file," he said.

Without referring to any case, Modi said law will take its own course. "I do not have right to do any cover up either... It is not right to say that we have not spared any dynasty," the PM said.

The PM said it was his conviction that if India is to develop we need to empower the poor.

On UP assembly polls