A V Rajwade: Think before you write an option

Financials may be better proxies to play the consumption theme

The inconvenient truth is fairly straightforward. India is still a very populous and poor country

Over three months ago, Reserve Bank of India (RBI) Governor Raghuram Rajan, got into some hot water for likening (to a foreign journalist in the United States) India's good economic performance (relative to other major world economies) as a case of "in the kingdom of the blind the one-eyed is king". There was strong criticism of his remark from many quarters in India, including by some government ministers. There is a view that this "gaffe" may have been the proverbial last nail in the coffin for his chances of being renewed in his stewardship of the RBI in September, when his current term expires. It was seen as one more "politically incorrect" public statement by an outspoken governor with a track record of "off message" public remarks. My own view hews close to that of a much respected former senior econocrat who is reported to have said, "I agree with Dr Rajan's statement but not with Governor Rajan's". The point here is that for the head of a respected public institution there are responsibilities, restraints and context that may need to be respected for the sake of the institution's autonomy and functioning. Let me also state that in losing Dr Rajan to US academia (for whatever underlying reasons) we are losing one of our finest RBI governors of recent times. And that is a great pity.

Here my purpose is to spend a little time on India's economic performance and position relative to other major economies. As far as I know, Dr Rajan'sremark was made in the context of India's recent macroeconomic performance, especially economic growth, relative to other large economies. The first three columns of the table present, for 15 large economies, growth estimates for 2015 and projections for 2016 and 2017 from the latest IMF World Economic Outlook Update (July 19, 2016). A quick glance shows that India is indeed the fastest-growing large economy in today's world, as often stated by government ministers and spokesmen. China comes second and Indonesia third in this listing. The rich, industrialised United States, nations of Europe and Japan are growing at only around two per cent or less. Brazil, Russia and Nigeria are in recession and South Africa is teetering on the brink, all hit hard by the crash in commodity prices in the last two years.

Of course, many analysts (including myself in Business Standard April 9, 2015) have wondered whether India's growth estimates for recent years might be upwardly biased (by one-two per cent points) because of methodological problems associated with the shift to the new base for estimating national income and growth that was initiated in January 2015. In fairness, we have to also note many analysts have suggested that China's sharp economic slowdown in recent years may be steeper than shown by official growth data. So, even if one accounted for the alleged upward bias in economic growth estimates of these two Asian giants (and there is really no authoritative way of doing that), the relative rankings would not change: India would still remain the fastest-growing large economy in today's world.

That is good. But it is far from the whole story. Before we get swept away by euphoria from being "top of the charts" on current economic growth rankings, we have also to look at international comparisons with respect to the level of our national income, GDP or other indicators of living standards. The table provides the information with respect to per capita GDP (and ranking across more than 180 countries), measured both in "nominal dollars" (that is converted by market exchanged rates) as well as purchasing-power-parity (PPP) dollars, which adjust for price differentials across countries (a typical example is the cheapness of haircuts in India compared to those in richer countries). The last column adds the ranking according to the well-known UNDP Human Development Index (HDI), the major components of which are: Life expectancy at birth, expected years of schooling, mean years of schooling and gross national income per capita. 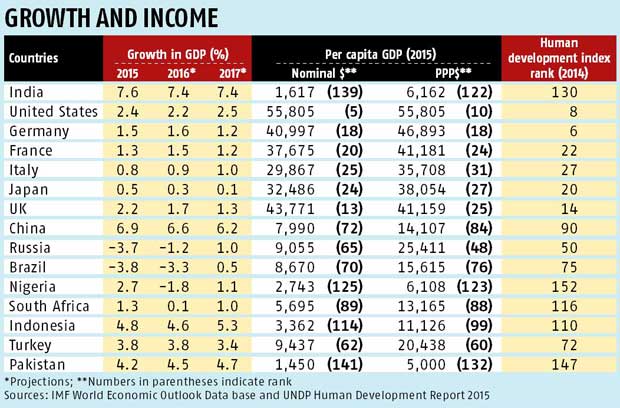 A perusal of these latter three columns of the table is far less euphoria-inducing. In nominal dollars, India's per capita GDP is only about three per cent that of the US, about five per cent of Italy's, one-fifth of Brazil's and China's and half of Indonesia's. Only Pakistan has a little lower per capita GDP than ours, among the 15 countries listed. Among 183 countries, we rank a lowly 139. Even when we correct for price, differentials and move to PPP dollars, our per capita GDP is only about 11 per cent that of US, 17 per cent that of Italy, about two-fifths of China's and Brazil's and a little over half of Indonesia's. Our rank among all countries moves up a bit to 122. Nothing much to boast about. And, ranked according to the HDI we come 130.

The inconvenient truth is fairly straightforward. India is still a very populous and poor country, where average living standards are extremely low for the great majority and life is very hard. Yes, matters have improved over time, especially in the last 25 years. But we have a long, long way to go. Even to get to China's average living standards today might take us a couple of decades of seven to eight per cent economic growth.

And to sustain that kind of growth over decades would take massive and ongoing reforms of the kind we have only managed in fits and starts in our post-Independence history. Last week's passage in the Rajya Sabha of the 122nd Constitutional amendment Bill, which lays the foundation for further legislation to implement the nation-wide goods and services tax (GST), designed to usher in a truly national market, was a landmark event. It gives real hope for India's economic future. The finance minister and his team (and their predecessors) merit enormous congratulations. However, in the twittered quote of the Union revenue secretary "it is only the end of a beginning…". A lot more hard work and cross-party political cooperation remains ahead.

The writer is honorary professor at ICRIER and former chief economic adviser to the Government of India. Views are personal