JUST IN
TRENDING
You are here: Home » Opinion » Lunch » Other
;

Swimming against the tide 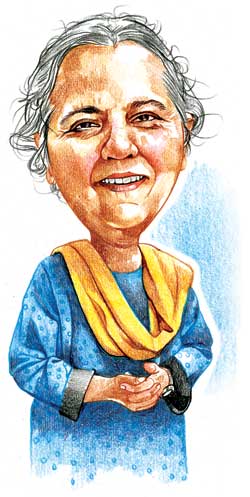 Which young woman of 21 would want to trade her life of comfort, restaurants and friends, a life wherein everything is provided for, and settle for one replete with struggle even for the basic amenities of life, no friends and even some hostility?

That would be Reema Nanavaty, now 51, and SEWA's (Self-Employed Women's Association) director for rural and economic development. I am meeting the Padma Shri award winner for lunch at Side Wok in Gurgaon, a New Delhi suburb. She has just finished a meeting in the area and has a short window before her next meeting at Delhi's Gol Dak Khana. Both of us are vegetarian and we decide to share a helping of crispy vegetable salt and pepper and a Cantonese mixed vegetable with fried rice. The food arrives promptly and is above average.

Like many city-bred children, Nanavaty was oblivious of the kind of poverty that existed in India, the struggles of rural existence and till the age of 21, remained happy in her own bubble. Her parents didn't cast their girls - she has four sisters - into typical moulds and after Nanavaty finished her master's in microbiology, she realised she didn't want to tread the path her academic qualification would lead her to. Instead, she took up a course in the German language, thinking she might go to work in Germany but later changed her mind. She sat for the UPSC entrance examination in 1983-84 and cleared it.

But before she set off for her training, she happened to read an article on a waste collection drive that SEWA was organising in the city. Impressed, she wrote to SEWA that she'd like to come and see the work it was doing.

She heard nothing for a while and just when she was about to leave for her IAS training, she received an interview call from SEWA and after a couple of rounds of interviews, an offer to work for its rural wing. Gujarat was going through a severe drought at the time and her work would involve helping with drought relief. Although the salary was not princely and the work seemed hard, Nanavaty found herself drawn to it. "I felt it would give me a glimpse into the country like nothing else would," she says.

"I found that women there would work on the drought relief programmes the whole day in the hot sun, and in the evenings, instead of going home, they would go to another site and dig the soil till late into the night." When she asked them why they would do that, the women said they were digging for a plant that had small tubers, which would be their only meal of the day. "That made me really understand what poverty in our country was like. They couldn't go home because there was nothing to cook at home," she says. It also made her see how wide the gap between their lives and her life was - she carried a packed lunch and went home to a hot, elaborate dinner.

That incident must have left an impression because Nanavaty decided to devote herself full-time to this "different life". Before she knew it she found herself living in Radhanpur in Banaskantha, a fairly backward region in Gujarat with little or no water, erratic electricity supply and very basic fare for food. Initially, Nanavaty spent the working week in the area and went home to Ahmedabad on weekends. Sometimes, especially when I met my friends who seemed to be living such a comfortable, carefree life, I wondered whether I really wanted to do this." She would fall sick often because the water in the region was of very poor quality, she got skin rashes and frequent infections and was often badly sunburnt. "At times I would wonder, 'what am I doing here'."

In a while, she got so attached to that life that she started spending her weekends and even festivals with the villagers. Although she had deferred her UPSC selection, somewhere at the back of her mind, she had actually left it behind her.

It was when she was helping organise the women as water users and looking for ways to help them earn a livelihood that she noticed that the women around her wore costumes with intricate, delicate embroidery. It struck her that there could be a market for this and she started participating in exhibitions in Mumbai and Delhi with a few embroidered pieces. Almost immediately, buyers came forward, keen to place orders.

Then came the tough part: organising the women who would embroider and do so in large numbers so as to feed the demand. Convincing them that she and the SEWA team really wanted to help them meant gaining their trust first. Well-meaning, free assistance was so rare that the simple village folk would treat it with natural mistrust.

Actually, a chance incident made them view her with suspicion. She was heading to one of the villages when a group of women walking in the hot, dusty desert area sought a lift. SEWA rules barred the workers - all women - from offering lifts for their own safety. So when she reached their village, the women, who she could not accommodate in her vehicle, raised a simple question: If she couldn't even offer a lift, how would she help them? In fact, they asked her to leave their village. She felt thoroughly humiliated; a co-worker suggested they leave the village and not go back.

But Nanavaty argued that they must stay in the village and work on convincing the women because if they didn't, the villagers would be convinced that they (the SEWA team) never meant to help them to begin with. That was a decision that would change many lives.

Some of the women, whom she had been persuading to do the embroidery, paid her a visit at 5.30 next morning and had a cup of tea and breakfast with her. They seemed to be testing the waters and later when she made an appeal at a larger forum, her morning visitors spoke up in her support. She was able to gather a group of 50 women (in 1985-86) with embroidery skills and that was the beginning of SEWA as the world knows it today.

Although SEWA is synonymous with its clothing - kurtas, sarees and blouses - there's a lot more that the organisation - it is both an organisation and a movement - does that is not widely known. Nanavaty says embellishing garments is just 10-15 per cent of SEWA's work. A second major source of income and employment for the local women is the dairy development work that SEWA started in Gujarat. To ensure that the desert doesn't advance, it started to work on forestry, nursery raising and plantation. Women in the region raise about two million saplings every year and plant them. Local farmers buy the plants. By the time her efforts began to bear fruit, Nanavaty was no longer 21, she had put her IAS plans behind her and knew what it took to bring about change.

In 2013, she was awarded the Padma Shri for her work with SEWA, which now has about two million women working in countries such as Afghanistan, Bhutan and Sri Lanka. In the interim, she got married and had two sons.

With such all-consuming work, where does she find the time to have a life of her own, I ask. She says she has had great support from her family. Her husband, Mihir Bhatt, son of SEWA founder Ela Bhatt, and founder and director of All India Disaster Mitigation Institute, never stopped her from doing what she wanted. She took her children with her wherever she could, convinced that they would either love what she did or hate it. Both her boys were supportive and even excited by what she was doing. Her own mother extended a helping hand when needed.

As I hear her speak, I realise I had underestimated Nanavaty. As our conversation draws to an end, she says, "If you decide to do something, you must do it perfectly, or not do it at all." When she was 49, egged on by her swimming coach, Nanavaty decided to participate in the Gujarat state women's swimming championship in the 40-plus category.

I am having lunch with the winner.