JUST IN
TRENDING
You are here: Home » Opinion » Financial X-Ray
;

Most firms will face margin pressure but Idea, with higher leverage and capacity shortage, will feel the heat The aggressive rate plans of Reliance Jio (Rjio) are expected to worsen the operational and financial metrics of incumbent telecom majors, impacting cash flows and aggravating their debt positions. The fall in data realisations and margins would be further compounded by the need to invest in upgrading networks and bidding for spectrum to match service quality of competitors.

Among incumbents, Idea Cellular is expected to be impacted the most, given its lower network investments, say analysts at Motilal Oswal Securities.

While data prices are expected to fall 30-35 per cent from January 1 and near-term earnings will weigh on Bharti Airtel and Idea Cellular, over the long term, Bharti’s stronger network and spectrum capacity could provide it a competitive edge in the data market, they add. Companies will also need to spend more on marketing to reduce the churn and cushion the hit to voice revenues. 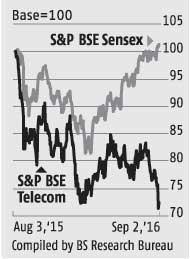 While the deterioration of operating metrics is a given, net debt levels for Bharti Airtel at Rs 83,491 crore and Rs 38,754 crore for Idea could also go up. The two companies have announced a capex of Rs 20,000 crore and Rs 8,500 crore, respectively, for FY17.

Analysts say if a 200-300 basis point fall in margins is taken into account, net debt-to-Ebitda levels for Bharti could increase from 2.4 times to 2.9 times, while that for Idea Cellular could be upwards of 3.5 times from the current level of 3.25 times.

However, there are some factors that need to be watched. While Ind Ra analysts expect incumbents’ debt profile to deteriorate in FY17 due to high capex on network expansion and acquisition of additional spectrum to compete with RJio, how aggressive Idea is during the forthcoming auction will also be a factor, which might push up its leverage (beyond analysts estimates).

Currently, Bharti has the largest spectrum holding at 770MHz followed by RJio (596MHz), Vodafone (302MHz) and Idea (271MHz). Reliance Communications will also be impacted as it is the most leveraged among listed entities, with net debt-to-Ebitda of 5.6 times.

Most analysts believe incumbents will go for selective bidding across spectrum bands to shore up their holdings. Although Idea has improved its capacity in the past couple of auctions, analysts at Kotak Institutional Equities say the company needs to assess if it can continue with its pan-India ambitions without any equity infusion. They also estimate (could change depending on RJio impact) that given the sharp average revenue per user and margin compression, Idea could post losses at the net level in FY18 and FY19.