JUST IN
You are here: Home » Opinion » Financial X-Ray
;

Expansion-led strategy is positive; profit gains will be capped as new hospitals take time to break even 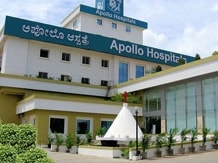 Apollo Hospitals, with 69 hospitals and total bed capacity of 9,554 as on March 31, 2016, has continued its expansion spree. The company, which had allocated Rs 600 crore for capacity expansion in financial year 2016-17 (FY17), recently signed an agreement with Hainan Ecologicals to build a state-of-the art hospital in Hainan Province, China.

The expansion-led growth strategy is positive, but margins are equally crucial. While expansions done a few years ago should support margins, new ones will weigh on consolidated margins for some time.

For instance, expansions undertaken three years ago at Vanagaram and Jayanagar reported an Ebitda (earnings before interest, taxes, depreciation and amortisation) of Rs 19.5 crore in FY16 as compared to Rs 6.8 crore in FY15, whereas capacities added thereafter are still reporting a loss at the operating level. Hospitals such as those at Tiruchirappalli; Nashik; Women & Child, Old Mahabalipuram Road, Perungudi; Women & Child hospital, SMR, Visakhapatanam and Malleswaram, which were commissioned during FY14-FY16 reported a combined Ebitda loss of Rs 21.6 crore in FY16. Profitability could be under pressure in the near term because of a large addition of beds and investments in AHLL (Apollo Health and lifestyle, the new format initiatives) say analysts at Edelweiss. 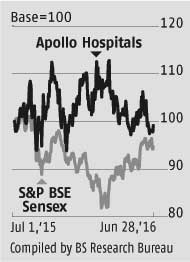 The stock, after seeing highs of Rs 1,544 on March 2, has corrected to Rs 1,319, as the results of the quarter ended March disappointed with Ebitda margins coming in at 11.7 per cent against 13.5 per cent a year ago.

The health care services segment (51 per cent of consolidated revenues) has grown annually at 13.1 per cent during FY11-16 aided by new hospitals. Analysts at ICICI Securities expect health care sales to grow annually by 15.2 per cent during FY16-18 to Rs 4,099 crore as the company invests in new assets. However, they too believe expansions are likely to put pressure on Ebitda margins in the short to medium term.

However, the pharmacy business (about 40 per cent of revenues) has grown with an increase in Ebitda margins. It reported 3.6 per cent Ebidta margins in FY16 as compared to 3.3 per cent in FY15. Analysts at ICICI Securities expect the business to grow 19 per cent annually during FY16-18 on the back of higher sales from existing stores. The segment also offers a value-unlocking opportunity, keeping analysts optimistic.

Edelweiss has a target price of Rs 1,360, while ICICI Securities’ has set Rs 1,420, indicating that it may take a while for the stock to reach March highs.