Domestic mutual funds (MFs) have raised their stake in public sector banks (PSBs) in January - March 2017 quarter. In the first three months of calendar year 2017 (CY17), they have collectively put in Rs 11,469 crore in the Indian equity market, data show.

The flow continued in April as well, with the MFs putting in Rs 9,917 crore compared to Rs 4,196 crore in the previous month. In past seven months, between October 2016 and April 2017, mutual funds have pumped in Rs 53,469 crore in equities. By comparison, they had invested Rs 16,527 crore in the previous corresponding period.

Of the 16 PSBs where mutual funds hold stake, their holding in 13 banks increased by up to three percentage points in the March quarter. In eight banks, including State Bank of India (SBI), Canara Bank, Oriental Bank of Commerce (OBC), Vijaya Bank, Corporation Bank and Bank of India (BoI), MFs have increased their holdings for the second straight quarter in a row, data show.testing.. we are here....

Analysts attribute the stake hike in PSBs to the likelihood of an improvement in financial metrics amid policy initiatives of the government and the Reserve Bank of India (RBI) to tackle the non-performing asset (NPA) issues.

"Bank stocks have been doing well and caught investors' fancy in anticipation of likely policy measures to tackle the NPA problem. I think things will change over time, as all the stakeholders - banks, RBI and the government - realise that these problems need redressal. Given that the markets are forward looking, a lot of this development has been pre-empted," explains Ramnath Venkateswaran, fund manager - equity at LIC Mutual Fund.

Among individual banks, Oriental Bank of Commerce, Punjab National Bank (PNB), Bank of Baroda (BoB) and Union Bank of India have seen rise of more than one percentage of shares held by MFs. On the other hand, Andhra Bank, Indian Bank and J&K Bank saw MFs cut their stake by less than 50 basis points, the shareholding pattern data suggests.

"We hold SBI and BoB in our portfolio. However, we have not increased out stake in these two in the recent past.

We remain tilted towards retail private banks and non-banking finance companies (NBFCs) as the credit growth is only happening on the retail side. Corporate credit growth is still muted. As regards the PSBs, there are still NPL related issues. That apart, the capital adequacy is not uniform across the sector, especially in the PSBs," says Harsha Upadhyaya, CIO (Equity), Kotak Mutual Fund.

The government, on Friday, notified the Banking Regulation (Amendment) Ordinance 2017, kick-starting a new framework to deal with Rs 6 lakh crore worth of non-performing assets in the Indian banking system.

The banking regulator has also been empowered to decide on dealing with toxic assets and instructing banks to act accordingly. The RBI will also set up multiple oversight committees to direct banks and joint-lending forums to deal with the stressed assets.

Despite the move, experts remain cautious on the segment and suggest that the NPA related issues will take time to get resolved. Upadhyaya of Kotak, for instance, feels that smaller PSBs will continue to face issues though there has been a move to resolve the NPA problem in the industry as the capital adequacy will deteriorate.

Going ahead, the pace at which the new resolutions are implemented will dictate how these stocks perform at the bourses, experts suggest.

"In case they are able to resolve any large NPL issues in the immediate term, these stocks can rally further from current levels. Else, I expect them to remain range-bound," Venkateswaran of LIC Mutual Fund adds.

“We are positive on the entire corporate banking space which includes large PSU banks. These banks are coming out of a bad non-performing loan (NPL) cycle and for the next two - three years, we expect their profitability to improve. Smaller PSU banks do not seem to be a good investment opportunity owing to their capital constraints and higher NPL issues," says Vinay Sharma, fund manager at ICICI Prudential AMC. 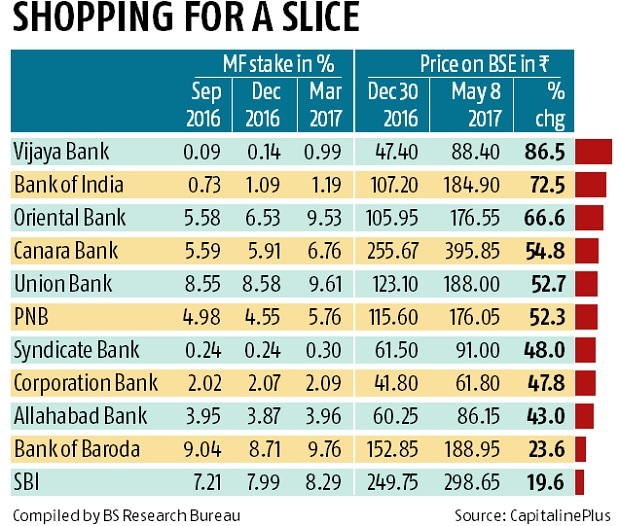