JUST IN
TRENDING
You are here: Home » Markets » Mutual Funds
;

Can Maruti stock continue to roar?

How staying invested in MF schemes via SIP pays

Most equity schemes have more than doubled their NAVs in 8 years, even if they entered at the pre-Lehman crisis peak 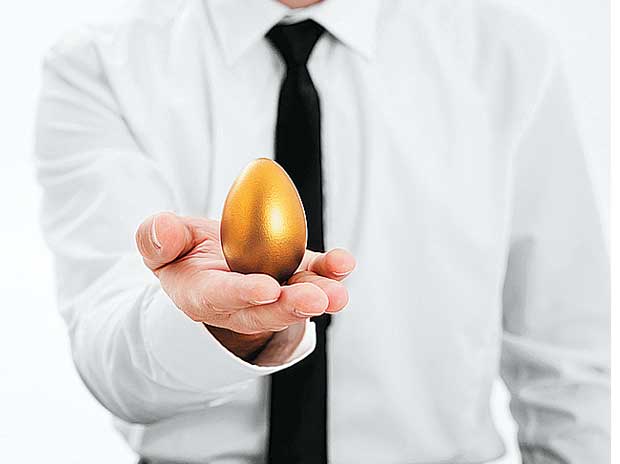 India’s equity fund managers have done quite a job since the Lehman crisis period. Investors who’d entered at the pre-crisis peak in January of 2008, when the 30-share Sensex touched a high of 21,000, have managed decent returns.

September will mark the eighth year since Lehman Brothers went bankrupt in late 2008. This had led to a global slump in financial markets; the benchmark Sensex lost a little over 60 per cent of its value over 14 months, plunging to levels of 8,000 in March 2009.

As a result, the net asset value (NAV) of India's equity mutual fund schemes dived, with a loss of 50-75 per cent. However, since then, these schemes have not only recovered the loss but more than doubled their pre-crisis NAVs. This is significant, as the Sensex is up only 33 per cent in absolute terms since the pre-Lehman peak, while equity schemes' NAV have jumped a little over 100 per cent.

Prashant Jain, chief investment officer (CIO) at HDFC Mutual Fund, says: “Historically, in India, equities have displayed cycles of six to eight years. This analysis captures the performance of MFs across a cycle and, thus, can be a sound alternative to more popular trailing returns. Simply following trailing returns over the near term might not be very rewarding when the markets are in transition as they appear to be today, just like in 2008.”

The strong comeback by MF schemes shows if an investor had invested at the peak of 2008, s/he would have still emerged with a sizable chunk of money if one stayed all through the crisis times and thereafter. This further strengthens the view that time spent in the market is more important than timing the market. 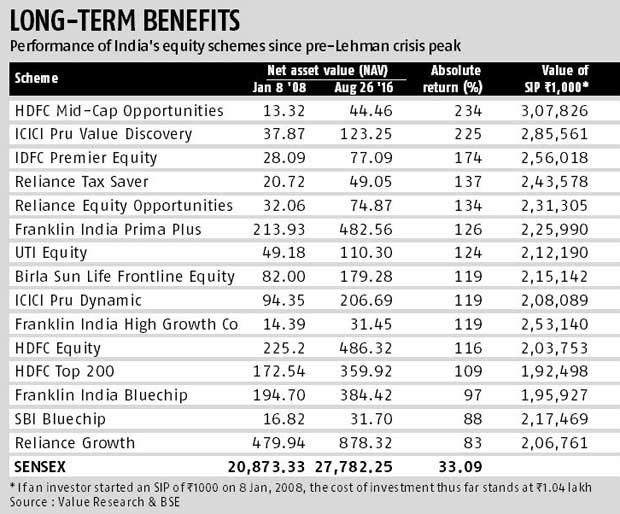 Sunil Singhania, CIO-equity at Reliance MF, says: “There is merit in the active fund management space in India. Fund managers can beat the benchmarks — we have the ability and flexibility to pick stocks before markets take recognition of it. Having said that, investors can make money even if they had entered at high levels. If one believes in the India growth story, investors should not look at market levels.”

Further, even if one had started through the Systematic Investment Plan (SIP) route in January 2008, the current value of investments would have more than doubled. The majority of the largest equity schemes have done it for investors over the past eight years. For instance, since the 2008 peak, a Rs 1,000 SIP would have accumulated into a principal sum of Rs 1.04 lakh.

Mahesh Patil, co-CIO at Birla Sun Life MF, says: “If an investor has a sufficiently long holding period, one would still make a decent return even while investing at the market crest, as India is a high growth economy. One needs to be disciplined and continue to have patience. Active fund management has generated benchmark-beating returns of four-five per cent over the long term, implying about 50 per cent additional return over the past 10 years.”

It is worth noting that as the global crisis struck India, there was a massive exodus of investors from equity MF schemes. The umber of investors’ equity folios went from 41.1 million till 29.1 mn. Those who entered late and panicked as their appetite to hold units was fragile were the biggest losers.

While, those who stayed invested emerged much wealthier. The Indian MF segment is no more a naive one. There are several schemes with a track record of over 20 years and an SIP investment of Rs 2,000 per month for two decades (about Rs 480,000 cumulatively) would have turned into a fat sum of nearly Rs 1 crore.