We can target all of US, says Kim Jong Un after North Korea tests ICBM

The ICBM test, which follows the first launch on July 4, raises tensions between major powers 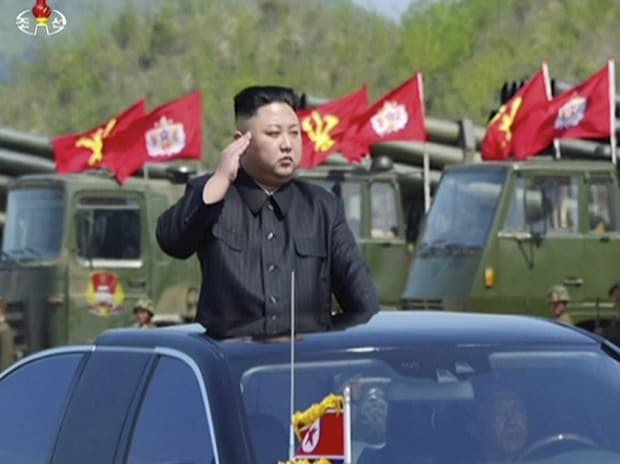 North Korean leader Kim Jong Un claimed he could strike the entire continental US after test-firing the regime’s second intercontinental ballistic missile within a month.

Friday’s unusual late-night launch drew condemnation from the US and its allies, with the top American general calling his South Korean counterpart to discuss a potential military response. President Donald Trump said the test was reckless and dangerous, adding in a statement the US “will take all necessary steps” to protect its territory.testing.. we are here....

“We have demonstrated our ability to fire our intercontinental ballistic rocket at any time and place and that the entire US territory is within our shooting range,” the state-run Korean Central News Agency said on Saturday, citing Kim. It said the test was part of the “final verification” of the Hwasong-14 missile’s technical capabilities, including its maximum range.

The ICBM test, which follows the first launch on July 4, raises tensions between major powers, with the US accusing China and Russia of providing Kim cover to pursue his nuclear ambitions. Trump has previously expressed frustration at the pace of China’s efforts to rein in its neighbour and ally, which it supports with food and fuel sales.

While US lawmakers have voted to send Trump legislation that would impose new sanctions on North Korea, the United Nations Security Council has struggled to reach agreement on potentially tighter penalties.

“As the principal economic enablers of North Korea’s nuclear weapon and ballistic missile development program, China and Russia bear unique and special responsibility for this growing threat to regional and global stability,” US Secretary of State Rex Tillerson said in a statement.

While the US seeks a peaceful denuclearisation of the Korean Peninsula, Tillerson said, “we will never accept a nuclear-armed North Korea nor abandon our commitment to our allies and partners in the region.”

China opposes North Korea’s launch and its violations of Security Council resolutions, Foreign Ministry spokesman Geng Shuang said in a Saturday statement in the People’s Daily newspaper. He called on all parties to show restraint.

The test showed North Korea’s progress in developing a missile capable of hitting US cities such as Denver or Chicago, according to Melissa Hanham, a researcher at the James Martin Centre for Nonproliferation Studies in California. Initial data suggested that if such a projectile were launched toward the US, it could travel about 10,000 kilometres (6,200 miles).

"It’s getting close to New York," Hanham said by email.

After the July 4 ICBM test, South Korea cast doubt on whether Kim had acquired the re-entry capability for the missile to survive the return to Earth’s atmosphere.

North Korea insists its nuclear program is designed to prevent an attack by the US or others. Trump rejected those claims, saying it had the “opposite effect.”

“By threatening the world, these weapons and tests further isolate North Korea, weaken its economy, and deprive its people,” he said.

Yonhap reported that Friday’s test was the first time North Korea had launched a missile from Jagang, a province north of Pyongyang that shares a border with China.

While Beijing has condemned Kim’s actions it has also been cautious about squeezing too hard amid concern it could spark a messy collapse of his regime and a refugee crisis on China’s border. It also worries such developments could spur a beefed-up US military presence nearby.

US Marine General Joseph Dunford, chairman of the Joint Chiefs of Staff, discussed “military response options” in a phone call with his South Korean counterpart, his spokesman said in an emailed statement that didn’t elaborate.

While Trump hasn’t ruled out a military response, Dunford warned in June that an armed conflict with North Korea would leave the millions of residents in Seoul, South Korea’s capital, to face casualties “unlike anything we’ve seen in 60 or 70 years.” Still, this month he told a security conference in Colorado that “what’s unimaginable to me” is allowing the capability for “a nuclear weapon to land in Denver, Colorado.”

Moon also called for talks with the US to consider the deployment of more Thaad missile-defence launchers to South Korea, an apparent shift from a decision to put the program on ice pending an environmental impact study. The defence ministry suggested any further installation would be temporary.

China on Saturday said it had grave concerns about the possibility of more Thaad launchers in South Korea. It called on the US and South Korea to stop the deployment, saying the launchers hurt the strategic balance in the region.

Pyongyang’s actions have undermined Moon’s early attempts to engage with North Korea via proposals to meet with Kim and discuss a peace treaty.

Moon instructed his government to now look at potential direct sanctions if necessary, his spokesman Yoon Young-chan said at a briefing.

Still, “Pyongyang has once again made it clear that they are operating on their own timetable,” Ralph Cossa, president of the Pacific Forum CSIS in Honolulu, said by email.

“My guess — and when it comes to North Korea we’re all guessing — is that they are waiting for the next sanctions resolution, which they will then say ‘forces’ them to accelerate their program and we will finally have our much-anticipated next nuclear test.”

(This story has not been edited by Business Standard staff and is auto-generated from a syndicated feed.)