Air India stake sale: Govt may include call and put options in agreement

Northern Ireland can stay with bloc in custom union after Brexit: EU

Ireland and the EU have called for any Brexit agreement to avoid a hard border including customs checks, in order to protect the 1998 Good Friday agreement 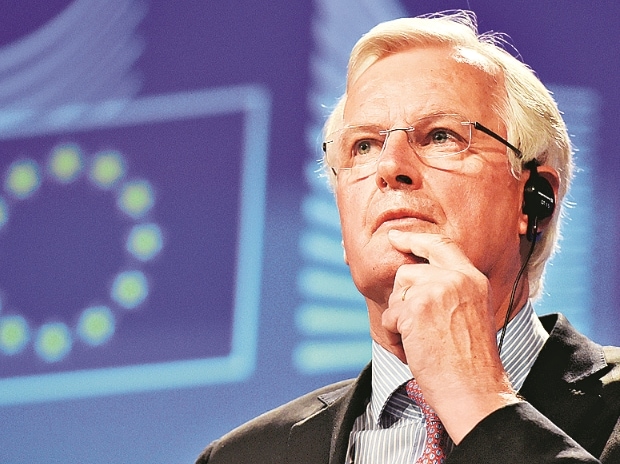 The EU said today that British-ruled Northern Ireland could stay part of a customs union with the bloc after Brexit if a better solution is not found.

The "backstop" proposal in a draft Brexit withdrawal agreement unveiled by EU negotiator Michel Barnier is set to stoke fresh tensions between London and Brussels.

Britain says it opposes anything that would effectively create an internal border in its territory, but Barnier insisted it did not threaten UK sovereignty.

"My personal opinion is that this backstop will not call into question the constitutional or institutional order of the UK," Barnier told a news conference.

The 120-page agreement says that in the absence of another plan, "a common regulatory area comprising the Union and the United Kingdom in respect of Northern Ireland" would be set up.

"The common regulatory area shall constitute an area without internal borders in which the free movement of goods is ensured and North-South cooperation," it says.

Ireland and the EU have called for any Brexit agreement to avoid a hard border including customs checks, in order to protect the 1998 Good Friday agreement in Northern Ireland, which ended three decades of bloody sectarian violence.

Britain says it wants a technological solution without staying in the customs union.

Barnier meanwhile warned that talks in Britain's departure in March 2019 must accelerate in order to succeed.

"If we wish to make a success of these negotiations -- and I certainly do -- we must pick up the pace," Barnier said.

The treaty attempts to set out details of the Brexit withdrawal deal that May and European Commission chief Jean-Claude Juncker sealed in principle after marathon talks in December.

British Foreign Secretary Boris Johnson caused a stir with a leaked letter that cast doubt on avoiding a hard border on the island of Ireland.

Speaking to Sky News, Johnson said the row was "being used quite a lot politically to try to keep the UK in the customs union, effectively in the single market, so we can't leave the EU."

The Irish issue is politically explosive in Britain, with May's fragile Conservative government propped up by pro-British MPs in Northern Ireland. May also has to keep key eurosceptics in her cabinet like Johnson onside.

A further point of disagreement is likely to be the extent to which the EU says the withdrawal agreement must be governed by the bloc's top court, the European Court of Justice, which is another red line for London.

On the transition phase -- a period in which Britain will follow EU law without any say in policymaking, in return for access to the single market -- Barnier on Tuesday said it would rule out an "open-ended" phase.

Instead the EU will insist on a "short" transition ending on December 31, 2020.

The draft also sets out details of the December pact covering the 35-39 billion (40-45 billion euros, $47-52 billion) financial settlement Britain will pay as it leaves the EU.

The draft was adopted by EU commissioners on Wednesday before going to the remaining 27 EU states and then to Britain.

The clock is ticking for both sides to finalise the withdrawal agreement and then ratify it before March 29, 2019, the date Britain leaves.

The EU and Britain are separately negotiating a framework for future relations.

May will give a keynote speech on Friday finally setting out her vision for those post-Brexit ties, while the EU will set out its own red lines at a summit in March.

Pressure on May mounted this week when opposition Labour leader Jeremy Corbyn announced a policy shift in favour of staying in a customs union with the EU.

Barnier said Tuesday he agreed with EU President Donald Tusk's view that so far, most of London's demands for trade after Brexit are "pure illusion".

Tusk meets May in London on Thursday as part of what he has called a "critical week" for Brexit talks.