JUST IN
TRENDING
You are here: Home » International » News » Others 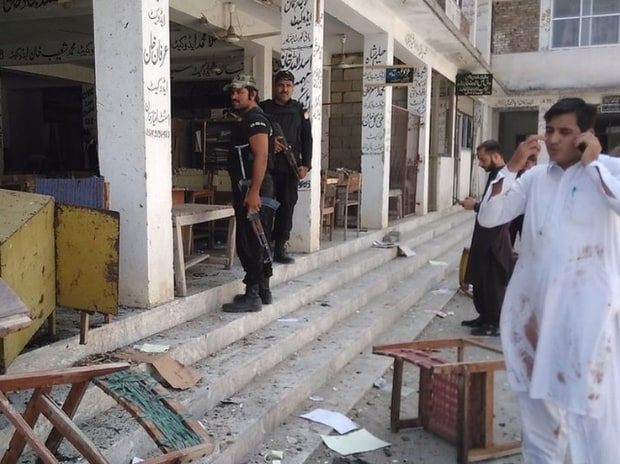 At least 13 people were killed and 54 others injured on Friday when a Taliban bomber blew himself up at Mardan district courts in Pakistan's Khyber-Pakhtunkhwa province, hours after security forces foiled an assault on Peshawar's Christian colony by killing four suicide attackers.

The attacker from the Tehreek-e-Taliban's Jamaat-ur-Ahrar faction apparently wanted to hit lawyers at the bar room, police said.

The attacker detonated a hand grenade before exploding his suicide vest among the morning crowds at the main gate of Mardan district courts.

"First there was a small blast followed by a big blast," chief rescue officer in Mardan Haris Habib said.

The injured have been shifted to a nearby hospital. A state of emergency has been declared at local hospitals and security has been tightened in all adjoining areas.

This was second attack on Pakistan's legal community. Last month, a blast in southern Balochistan province capital Quetta killed more than 70 people, nearly wiping out the senior lawyers of the city.

Friday's attack on court occurred hours after four heavily-armed suicide attackers tried to storm a Christian colony in Peshawar, killing one person and wounding several others before being gunned down by security forces.

In the predawn attack in the same province, terrorists struck the colony near Warsak Dam, just north of Peshawar, and killed one Christian security guard.

Soldiers backed by army helicopters rushed to spot where they exchanged gunfire with terrorists. All four terrorists were killed during the encounter.

Five persons including two Frontier Corps personnel, one policeman and two civilian guards were injured in the attack.

Two of the attackers detonated their suicide jackets while two others were killed by security forces.

No outfit has claimed responsibility for the attack, but such attacks are blamed on the Taliban.

A Taliban suicide bomber had targeted Christians in Lahore at Easter this year, killing more than 70 people.

Taliban militants stormed an army-run school in Peshawar in December 2014, killing more than 150 people, mostly children, in Pakistan's one of the worst terror attacks.

Friday's attacks came a day after an army spokesman said that Pakistan had destroyed organised presence of militants on its soil.

The army had launched operation 'Zarb-e-Azb' in June 2014 in a bid to flush out militants from the country's restive tribal areas and bring an end to the militancy that has killed thousands of civilian since 2004.