JUST IN
TRENDING
You are here: Home » Finance » News » Others
;

In the previous week, the reserves had declined $231 million to $363.2 billion 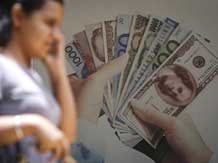 Foreign exchange reserves hit a life-time high of $363.8 billion after it rose $592.1 million in the week ended June 17, the Reserve Bank said on Friday.

The surge in reserves was on account of jump in foreign currency assets (FCAs), a major component of the overall reserves. FCAs rose by $594.3 million to $339.6 billion in the reporting week, RBI data showed.

FCAs, expressed in dollar terms, include the effect of appreciation or depreciation of non-US currencies such as the euro, pound and yen held in the reserves.

The country's special drawing rights with IMF dipped by $1 million to $1.5 billion and the reserve position decreased by $1.2 million to $2.4 billion, the central bank .