Govt reaches out to Sangh on FDI reforms

A holding company model will be much easier and low in risk to implement. The proposal is yet to reach the petroleum ministry 
The Cabinet Secretariat’s proposal to merge 13 oil PSUs into one behemoth is unlikely to become a reality in the near future. According to officials, the proposal is still in the realm of ideas and the ministry of petroleum and natural gas is yet to start working on it.

According to experts, if such an exercise was to be taken up, it would involve many legal and organisational challenges. It may take longer than the tenure of the present government, quipped an expert. Petroleum Minister Dharmendra Pradhan would not be the first to face such a challenge. Even an indomitable Mani Shankar Aiyar had to beat a retreat, ostensibly on the recommendations of V Krishnamurthy’s Synergy in Energy panel in 2005, after he attempted to create a large, high-value entity a year before.

One of the key requirements would be the legislative changes needed to alter the structure of Hindustan Petroleum Corporation and Bharat Petroleum Corporation, which were nationalised through a law approved by Parliament. Regulatory hurdles in merger of listed companies would also have to be cleared. While this process may not be difficult in itself, a merged entity will leave little headroom for disinvestment in future. 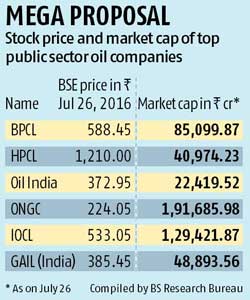 A regulatory hurdle could, however, come at the altar of Competition Commission of India (CCI). Indian Oil Corporation, Hindustan Petroleum Corporation and Bharat Petroleum Corporation among themselves control more than 90 per cent of domestic market for petroleum products. Their merger would mean a single entity controlling the market, even if different brands are retained. In other words, a monopoly would be created. These companies have had run-ins with the CCI on cartelisation earlier, with regard to supply of jet fuel tenders for airports and diesel tenders for Indian Railways.

The only window available to the government would be a little used provision in the Competition Act, which allows it to exempt enterprises from the anti-monopoly law in “public interest” or “national security”. However, in this case, use of Section 54 under the Act may be questioned. Is it worth taking the trouble of creating such a large entity? According to Kalpana Jain, partner, Deloitte, “The proposed merger of all India’s oil PSUs is humongous by any measure. It has the potential to create a behemoth with global scale and financial strength to stand among the largest in the hydrocarbon sector globally. It could help in achieving economies of scale, bringing in efficiencies, as well as in acquiring foreign oil equity with an eye on India’s energy security.”

Jain said it was crucial to consider that in the last decade-and-a-half, since the idea was promulgated, the business character of the PSUs has undergone a sea change. “They are now larger, more diverse and vertically integrated in operations with greater presence on foreign soil as well. The proposed merger involves complexities in execution on various fronts, including the number of stakeholders involved and ramifications on each of them. Though scale and financial muscle seem to be the obvious upsides, it could be challenging to implement efficient post-merger operations, systems and processes along with employee management.”testing.. we are here....

The better reason for attempting a merger, however, is for neutralising the current risks in oil market. Going ahead, as hydrocarbons would be shunned to a large extent, an oil producing company could benefit from being in the businesses of refining, retailing and even green energy. At some level, Aiyar had the foresight of allowing Subir Raha, then chairman and managing director of Oil and Natural Gas Corporation, to diversify businesses rather than merge. The thriving of Mangalore Refinery and Petrochemicals, a subsidiary of ONGC, and its various business initiatives has to be seen in this context.

A country like China, with which India competes in the global hydrocarbon sector, has a host of state-owned companies that specialise in different aspects of oil business. A much easier model to follow would be to create a holding company with all 13 oil sector PSUs as its subsidiaries. Such a holding company could well be listed at a much greater valuation like Coal India or Steel Authority of India, even as the subsidiaries remain listed.

The alternative course could be that the holding company remains unlisted till such time that the results of experiment are known.