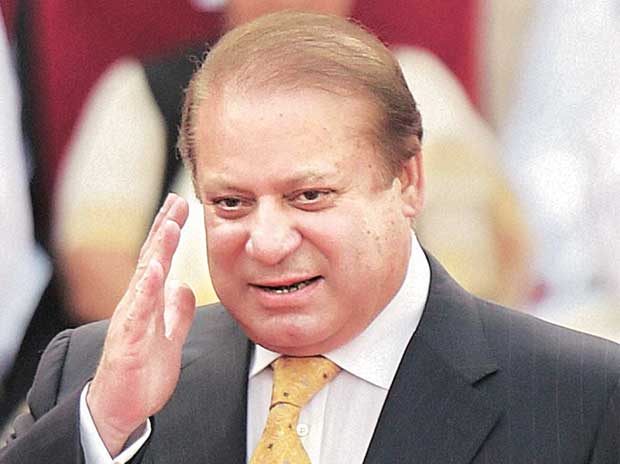 Pakistan has requested the UK for a third time to deport former prime minister Nawaz Sharif from London to serve his prison term in the country after being sentenced in corruption cases, according to a media report on Thursday.

Sharif, the 70-year-old supremo of the Pakistan Muslim League (Nawaz) who was ousted from power in 2017 by the Supreme Court on corruption charges, is in London for medical treatment.testing.. we are here....

A letter for the deportation of the three-time prime minister was handed over personally to the British High Commissioner here some three weeks ago, Dawn newspaper reported.

Through the letter, the Pakistani government asked the British authorities to consider cancelling Sharif's visit visa, which has allowed him to live in London on medical grounds since November.

The letter has cited Britain's own immigration laws of 1974 under which any person sentenced to imprisonment of more than four years had to be deported to the country of his/her origin.

When contacted, Shahzad Akbar, Adviser to Prime Minister Imran Khan on Accountability and Interior confirmed that the government has made three requests to the UK authorities to deport Sharif, with the last being on October 5.

The previous letter, he said, had been dispatched after the cancellation of Sharif's bail by the Islamabad High Court (IHC) last month.

In the latest letter, the government has pointed to a possible way out of the issue of specific deportation of the former premier, Akbar said, adding that the ball is now in the court of British government.

The IHC on September 15 issued non-bailable arrest warrants against Sharif in the Al Azizia case while hearing three applications filed by him, including the ones about forgoing the requirement of his surrender before the court and exemption from personal appearance.

The former prime minister left for the UK in November last year after the Lahore High Court granted him permission to go abroad for medical treatment.

He had submitted an undertaking to the court that he would return within four weeks or as soon as he was declared healthy and fit to travel by doctors.

Sharif criticised the military establishment in recent speeches at gatherings of the opposition Pakistan Democratic Movement.

Days before the July 2018 general elections, Sharif was convicted in the Avenfield properties case and sentenced to 10 years in prison. His daughter Maryam was sentenced to seven years in prison for abetment and his son-in-law Captain (retd) Mohammad Safdar to one year.

The IHC later granted bail to Sharif, Maryam and Safdar. Sharif, after his conviction in the Al-Azizia case, was sent to jail but released for eight weeks on medical grounds. The bail-granting order lapsed while the former premier was in London.

The IHC had in September fixed the appeals against conviction of Sharif in Al-Azizia and Avenfield cases. After hearing the pleas, the court rejected Sharif's applications seeking hearing in absentia and issued his non-bailable arrest warrants.

The court then issued his proclamation giving the former premier final opportunity to join the proceeding before confiscating his properties.

Separately, an accountability court in Islamabad has already confiscated movable and immovable properties of Sharif because he absconded in the Toshakhana case, which is about alleged corruption in purchase of vehicles.