TIFF 2017: As a cold-blooded terrorist, Rajkummar Rao impresses in Omerta Sheikh is played by an actor who is now a regular in Mehta’s films: the talented Rajkummar Rao

How do you make a film about a terrorist who stabs a person repeatedly, slits his throat, makes a video of the grisly act and broadcasts it to the world, as Omar Sheikh did to American journalist Daniel Pearl in Karachi in 2002? That’s the challenge director Hansal Mehta faced while making Omerta, which had its world premiere at the Toronto International Film Festival (TIFF) this month.

A filmmaker would typically try to look for another facet to the protagonist. Perhaps Sheikh felt remorse later? But there is documentary evidence of the terrorist grinning as he was arrested for the crime and led away by the police in Pakistan. Perhaps he was gentle with others who were not meant to be his victims? An explicit scene of Sheikh brutally grinding into a barely conscious woman at the beginning of the film offers no hope in that direction.

In an interview at TIFF, Mehta explained how he tried to create some dramatic tension for his character: “His redeeming qualities are that he is respectful to his father. He has a wife. He leads a normal life otherwise. You see how Pakistan treats him, they call him an adopted son.” Many Indian viewers would be familiar with Sheikh’s crimes.

Sheikh is played by an actor who is now a regular in Mehta’s films: the talented Rajkummar Rao. His British-Pakistani accent may be a little inconsistent, but he brings a tremendous intensity to the role, and is unsparing in his portrayal of a cold-blooded terrorist. “It was not an easy process,” Rao said. “It was very difficult and a very hard space for me to explore. You can’t imagine what it feels like to hate someone so much to the extent that you are ready to kill someone… for me it was important to get into the mental space of a man like Omar.” Mehta adds,

“He does the namaz to perfection.” 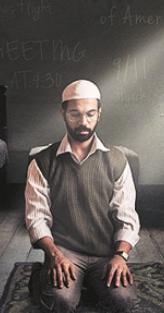 The film opens with Sheikh staging the abduction of four Western tourists in New Delhi, with material help and guidance from Pakistan. He is soon captured, owing to an alert Delhi Police, but his arrest sets the stage for the notorious hijacking to Kandahar of an Indian Airlines flight in December 1999.testing.. we are here....

Sheikh is freed along with two others by the Indian government in exchange for the passengers’ lives, and he makes sure to rub it in with much glee as he celebrates with his supporters in Pakistan.

Omerta ends with the Daniel Pearl incident, and in between are flashbacks that show how he was recruited and trained. Mehta puts Pakistan squarely in the dock, with several scenes showing Pakistani officials and religious leaders exhorting and aiding Sheikh in planning various terrorist acts and promising to have his back. “It’s important to name them. It’s important to stop bullshi**ing about it,” Mehta said.

The filmmaker said he relied on documentary evidence and public accounts for much of the script, and anecdotes for scenes like the one in which Sheikh moons the Indian flag and urinates in his jail cell as other prisoners sing Jana Gana Mana. Mehta’s wife was at London School of Economics (LSE) the same year as Sheikh and provided inputs about the political atmosphere on campus at the time. “She gave me a few snippets of information about LSE, and about the Islamic society there, which by itself is a film, (on) how… within the so-called progressive institutions, they breed these kind of young men.”

The film’s title is a play on Sheikh’s name as well as a reference to the vow of secrecy Mehta took while working on the film. It was a coincidence but fittingly enough, Omerta premiered on September 11, the 16th anniversary of the 9/11 attacks, yet another incident that Sheikh had a hand in.