The duo defeated Australian pair of Samantha Stosur and John Peers 7-5, 6-4 to win in 73 minutes 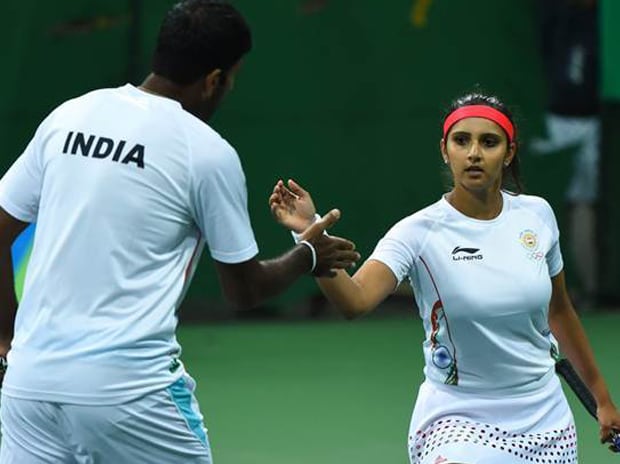 Sania Mirza and Rohan Bopanna in action during the mixed doubles game at the Olympics. Photo: Twitter

competition at the Rio Olympics with a straight-set win over Australian pair of Samantha Stosur and John Peers here.

Mirza and Bopanna, who are being touted as India's medal hope at the Olympics, broke little sweat in their opening round match to post a 7-5 6-4 win in 73 minutes.

The fourth seeded Indian pair took a little time to settle down but once they got the rhythm, there was hardly any looking back.

"Personally for me, it would be amazing to win a medal at the Olympics, which I don't have. It would mean the world us. We would do whatever we can and put our best forward," the world number one women's doubles player Sania told reporters after the match.

On a chilly and windy evening at a small court of the Tennis Centre in Barra, a lot of Indian supporters waited patiently since 3.30pm local time for the match to begin. It was delayed by men's doubles semifinals featuring Rafael Nadal and Marc Lopez, that took more than two hours to finish.

In the first set, both teams did not drop a point till the ninth game before Peers' serve was broken by the Indians and they went 5-4 up. But it did not help Sania and Bopanna's cause as they conceded the advantage in the next game itself and were broken back with the scoreline levelled at 5-5.

But before it went out of their hand, the Indians capitalised on an unforced error from their rival to take four straight points and break Stosur's service and wrap up the first set in 36 minutes.

In the second set, the Aussie pair started to wilt under pressure and a double fault from Peers gifted the Indians an early break and they took a 3-2 lead.

Even as 'come on India' chants grew louder, Sania and Bopanna held on to their serve to surge ahead 4-2.

Bopanna sealed the issue in the 10th game with three big aces, to which the Aussie had no answer.

"I had to come out strong. I was struggling with the wind and took a while to get set," said Bopanna, giving credit to Sania for keeping him relaxed.

"You feel a lot better as she brings the best out of me. We put a lot of pressure while returning to their serves which made a big difference. We were lucky to get a couple of breaks in the first set but unfortunately I could not hold serve at 5-4 but we managed to fight back and close it out with Sania serving," he added.

In the quarterfinals, the Indian duo will take on the unseeded Great Britain pair of Andy Murray and Heather Watson who beat Spanish combo of David Ferrer and Carla Suarez Navarro 6-3 6-3 in another first round match.

"Andy is one of the hottest players in the circuit. He covers the court pretty well. We will have to focus on our game," said Bopanna.

Four years ago in London, Sania, partnering with Leander Paes, made it to the mixed doubles quarter-finals.

Earlier, the Indians had suffered first round defeats in both men's and women's doubles in Rio Olympics.