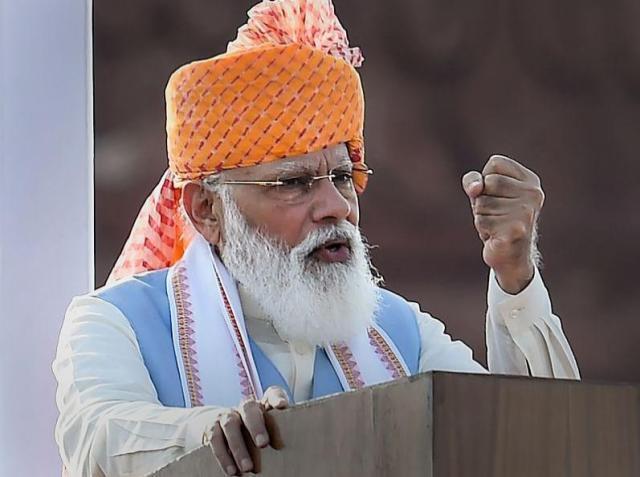 ind_modi
Independence Day 2021 LIVE updates: Addressing the nation from Red Fort in Delhi, Prime Minister Narendra Modi lauded the Tokyo Olympic winners and Covid warriors. Giving a call for ‘Sabka Prayas’ along with ‘Sabka Saath, Sabka Vikas, Sabka Vishwas’ for building a new India, PM Modi said, “We have to ensure we meet our goal of building Aatmanirbhar Bharat when we celebrate 100 years of India’s Independence.”

In these Covid times, the country is receiving its highest foreign investment and its forex reserves are at an all-time high, the prime minister said.

"As we celebrate 75 years of Independence, we have to ensure India becomes self-reliant in energy production," Modi told the nation. He announced the setting up of a National Hydrogen Mission to make India the new global hub of green hydrogen and its largest exporter.


"I have faith in our youth; this is a 'can do generation', it can achieve every goal," he said.


Describing the New Education Policy as a means to fight poverty, he said it will focus on encouraging teaching in regional languages. The government has decided to open all Sainik schools to girls, the prime minister said.

Earlier in the day, Modi hoisted the tricolour at the historic Red Fort before his speech.


It is Modi’s eighth such speech as Prime Minister since 2014.