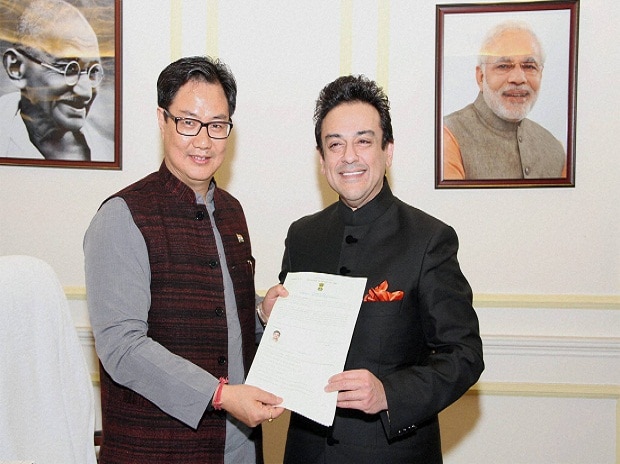 In this file photo, MoS for Home Affairs, Kiren Rijiju presenting the Certificate of Indian Citizenship by Naturalization to noted singer and musician Adnan Sami, in New Delhi.

Singer Adnan Sami, formerly a Pakistani, says he is elated to celebrate his birthday — which falls on August 15, India's Independence Day — as an Indian citizen for the first time.

He tweeted: "Feeling proud that today I celebrate my birthday for the first time as an Indian with My India. Happy Independence Day India."

The singer is known for rolling out hit songs like "Tera Chehra", "Kabhi to Nazar Milao", "Lift Karaa De" and "Kabhi Nahi".

Several celebrities from the Hindi film fraternity took to Twitter to wish the "Bhar Do Jholi" hitmaker.testing.. we are here....

Feeling proud that 2day I celebrate my birthday 4 d 1st time as an Indian wt My India!
Happy #IndependenceDayIndia pic.twitter.com/oOGkEU6IW4

Actress Prachi Desai told Sami: "India is celebrating its Independence with your birthday."