As part of strategic disinvestment, govt, LIC to sell stakes in Bank 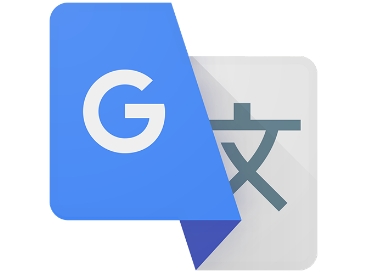 Google’s parent Alphabet Inc. is turning out to be one of the biggest winners of the economic reopening trade. On Tuesday, the company posted first-quarter sales results that were significantly higher than expected. Underlying the impressive performance were clear signs that the strength in the internet giant’s search advertising business may be sustainable for some time to come. Its resurgence may be just getting started.

Alphabet reported first-quarter revenue of $45.6 billion excluding traffic acquisition costs, up 35% from a year earlier and exceeding the $42.6 billion Bloomberg consensus. In its earnings release, Chief Financial Officer Ruth Porat cited broad-based growth in ad revenue, along with higher levels of online activity from consumers. Add to that the announcement of a $50 billion buyback plan and you have a recipe for a post-earnings stock pop: Alphabet shares climbed 4% in post-market trading.

Alphabet’s outperformance is understandable given the double dose of government stimulus and wider availability of vaccines, but the nature of the company’s business model increases the chance that the strong growth trend will be durable. It comes down to the company’s virtual monopoly of the search-engine advertising business. Last year, that dominant position was detrimental as it left Alphabet exposed to all areas of the economy amid the pandemic as it decimated the businesses and marketing budgets of traditional industries including travel, brick-and-mortar retail stores, restaurants and outdoor entertainment services. Now, those areas are set to rebound as daily life returns to normal — and Google’s ad revenue should benefit in the process. The shift has already begun. On Tuesday’s earnings call, Alphabet’s executives said retail was the company’s strongest area during the quarter, adding that they are seeing more travel-related searches. I believe the transition will last awhile. As more people get vaccinated and the economy steadily reopens, there will be several quarters where the beaten-down sectors outperform.

On top of riding the recovery, there is also room for Google to improve the profitability of its search-engine business. According to Wedbush Securities, roughly 80% of searches are still not monetized with digital ads. And a Cowen survey of 52 U.S. ad buyers found that 70% of respondents said Google Search ads offered the highest return on investment. As demand improves, Google will be in the fortunate position of being able to either increase its ad inventory or raise its pricing. Google also has less relative exposure to areas of the market that are facing growth headwinds in the second half of the year: e-commerce and mobile-app install ads. Online sales are set to slow as physical stores reopen and consumers start spending more on experiences over physical goods, while the mobile ad business will be under pressure after Monday’s release of Apple’s new privacy feature that allows users to block data-tracking by apps on their iPhones.

Investors have already bid up Alphabet shares by more than 30% this year amid rising optimism over its prospects. However, the stock price may continue to do well. The market tends to give companies higher valuation multiples during periods when sales growth is accelerating. Alphabet fits the bill. Its revenue growth is expected to improve markedly this year. That’s a contrast to 2020’s pandemic winners Amazon.com Inc. and Netflix Inc. — both companies are expected to have slower growth this year. 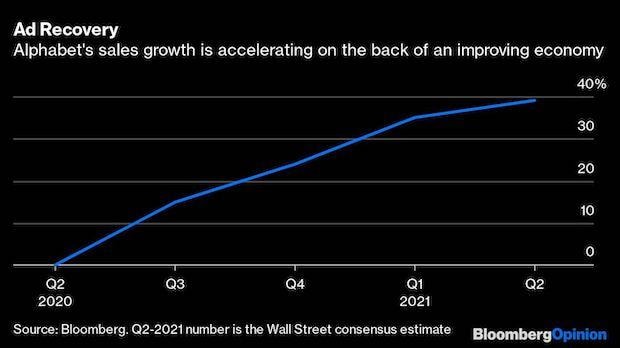 Of course, Alphabet still remains under antitrust and regulatory scrutiny and that’s no small thing. It has been sued by both the U.S. Department of Justice and dozens of state attorneys general last year for its anticompetitive business practices and the use of exclusionary distribution agreements for its search engine. But these lawsuits will take years to sort out and we may not see any new developments for some time.

For those investors who want to wager on a broad-based economic recovery now, there may be no better bet among the technology giants than Alphabet.