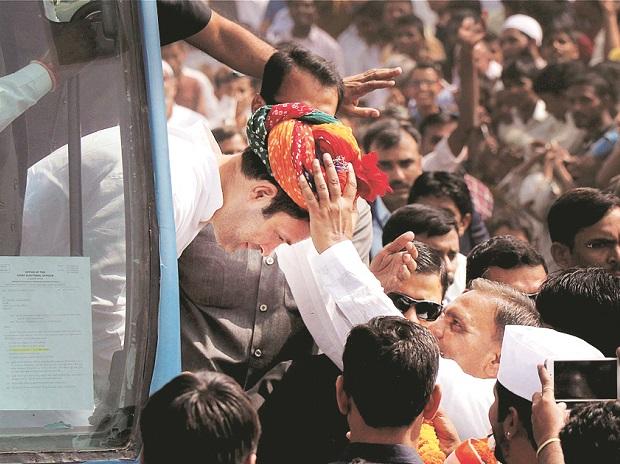 Congress Vice-President Rahul Gandhi being presented a turban by supporters during a roadshow at Banaskantha in Gujarat on Sunday Photo: PTI

A Congress revival plan for the 2019 Lok Sabha polls has asked the party leadership to take the lead in shaping an opposition alliance, form electoral understandings in states where the party is weak, decisively curb infighting and make efforts to bring moderate Hindus back to the party fold.

In a reference to the internal contradictions within the Congress, as Rahul Gandhi prepares to take over as the party president, the plan says the Congress has a number of young leaders who can spearhead the revival effort under the guidance of seniors.

The Congress’ research department, headed by its Rajya Sabha member M V Rajeev Gowda, has submitted the revival blueprint to the party leadership. Gowda was appointed the chairman of the reconstituted research department in June. The plan attempts to diagnose Congress weaknesses and suggests steps to redress these. It also makes an assessment of the contradictions between what the Bharatiya Janata Party (BJP) had promised in 2014 and the “abysmal” failure of the Narendra Modi government to deliver on these promises, particularly on economic growth and job creation.

It has advised the party to present an alternative economic approach based on small businesses, job creation and entrepreneurship and construct a narrative and ideology that goes beyond the appeals to caste and religious identities.

It says Modi risks a violent political backlash from a large section of youth and middle classes, who had voted for his vision of achche din, or better days, if the BJP fails to rein in its violent fringe. Gowda and his team hope the Congress would be able to convey to the voters that communal tensions would hit economic growth, even as the BJP tries to revive the Ram Janmabhoomi issue in the months to come.

The plan says the Congress needs to bring back into its fold Hindus repelled by the Sangh Parivar trying to “mangle” a pluralistic, tolerant and self-reforming faith. The plan asks the party to take its message to the youth and women — sections of the population upset at the curbs on their personal freedoms. The Congress, it says, must strengthen its outreach to sections disappointed with Modi’s government’s failures on the economic front and also those repelled by its divisive social agenda.

The party has already started its outreach to powerful agrarian castes such as the Marathas in Maharashtra, Kapus in Andhra Pradesh, Jats in Haryana and Patidars in Gujarat. In Karnataka, the Congress has taken up the issue of Hindi imposition by the Modi government. These varied groups represent a counter force to Modi-led BJP, says Gowda.

On the electoral strategy front, it doesn’t rule out the possibility of the PM deciding to hold Lok Sabha elections in December 2018, along with Assembly polls to Chhattisgarh, Madhya Pradesh and Rajasthan. It believes the BJP faces severe anti-incumbency in these three states and simultaneous elections could be a way for the BJP to overcome local anti-incumbency. These states feature direct fights between the Congress and BJP. But the team says Congress needs more electoral victories in the run-up to the next Lok Sabha polls, like the one in Punjab in 2017.

In 2014, the BJP won 254 of its 282 seats in 12 states of Uttar Pradesh, Maharashtra, Madhya Pradesh, Gujarat, Rajasthan, Bihar, Karnataka, Jharkhand, Chhattisgarh, Assam, Haryana and Delhi. The plan says a targeted Congress effort can reduce BJP’s tally in these states.

According to the research team, Modi has personalised and centralised governance and all that the Congress needs to do is convince voters that he misled them. Modi will take the entire party down with him, it says. It has also suggested that the party showcase the contrast between Rahul Gandhi, who is willing to take questions, and Modi and BJP chief Amit Shah, who rely on monologues. It has also suggested that the party put in place a shadow cabinet to showcase BJP’s limited talent pool and the bench strength of the Congress.

It has advised the party to galvanise dormant party workers, invest in training of workers on the lines of the party’s Kerala unit, modernise departments and work on state-specific agendas to counter BJP’s one-size-fits-all narrative. It, however, believes it is vital for the Congress to break the “stranglehold” of the BJP on the media narrative to put forth a clearly articulated alternative vision through a sustained media and social media push.

A former professor at the Indian Institute of Management, Bangalore, Gowda works with a team of younger party leaders like Ranajit Mukherjee and Harsh Vardhan Shyam and young graduates from some of the leading universities in the US and the UK.