JUST IN
TRENDING
You are here: Home » Beyond Business » Features
;

After Bihar's tax on samosas, Kerala 'weighs in' on fat tax on junk food

At Rs 36.5 crore collection on Day 1, it is the second-best opener for Salman Khan and Bollywood after Prem Ratan Dhan Payo 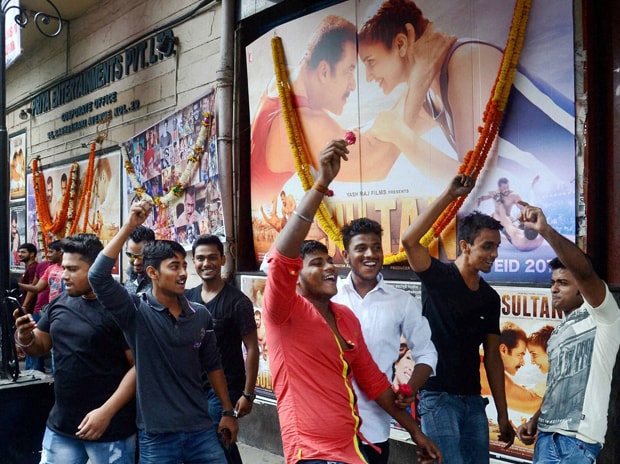 Fans of actor Salman Khan dance during the release of the actor's new movie "Sultan" at a cinema hall in Kolkata on Wednesday. Photo: PTI

Yash Raj Films’ (YRF) Sultan collected Rs 36.5 crore on the opening day — July 6. This is one of the best openings for a Salman Khan film, second only to last year’s Diwali release — Prem Ratan Dhan Payo (reported collection was around Rs 40 crore).

The film, that tells the comeback story of a wrestler, has been released in 5,000 screens across the country, making it one of the widest releases from Bollywood ever. Expectations from the film were high since the Dabangg actor has delivered super hits on the occasion of Eid since Wanted (2009).testing.. we are here....

Suniel Wadhwa, independent distributor and box office analyst says, “Sultan had a near-record first day to kick off its run at the box office with Rs 36.50 crore (net after tax). This is the second-highest grosser of all time. The film is next only to Prem Ratan Dhan Payo’s Rs 40 crore, beating Salman Khan’s previous second-best of 2012’s Ek Tha Tiger at Rs 32.93 crore, which was also an Eid release.”

The advance booking for the film was the strongest in the past couple of years, with some territories showing 80 per cent advance bookings on day one. With Eid being postponed by a day, the film is expected to outdo its first day collection on Thursday, with analysts predicting the second day collection could be a massive at Rs 43-45 crore.

The film has been made on a budget of around Rs 85 crore and is expected to net around Rs 320-340 crore in its lifetime, with the first five days accounting for Rs 150-175 crore in collections. Overseas too, the film is expected to do well. It has been released in 1,000 screens, also among the highest for a Bollywood film.

Salman Khan now has three of the best openers from Bollywood.

The Khan triumvirate dominates the top five, with Shah Rukh Khan and Aamir Khan having one film each in the list.

YRF is the most featured studio in the top five list with three films to its credit – Sultan, Ek Tha Tiger and Dhoom 3.